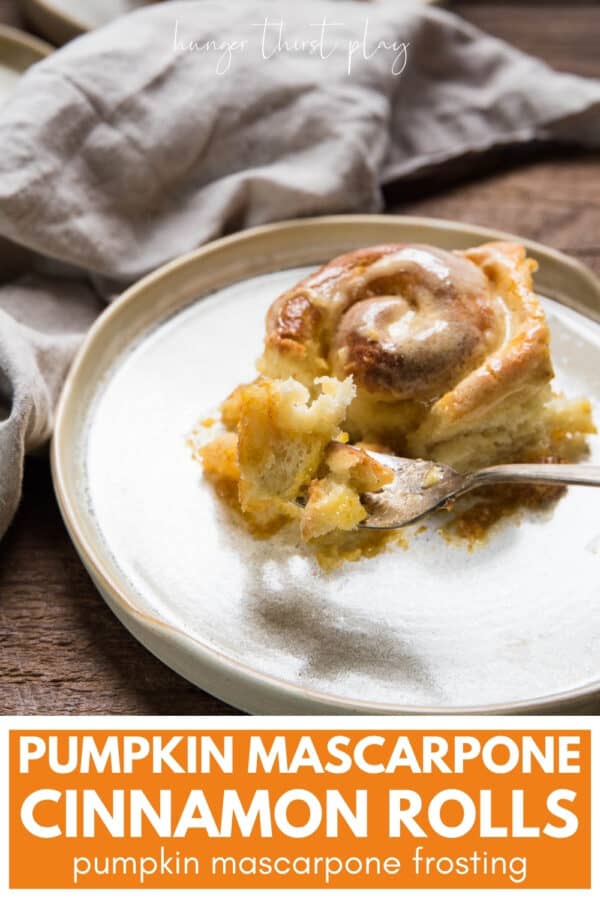 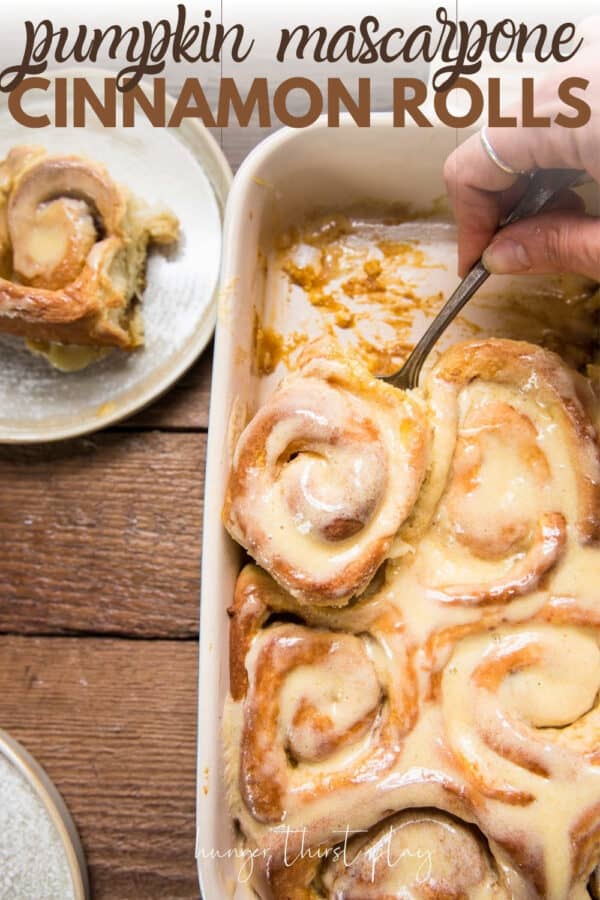 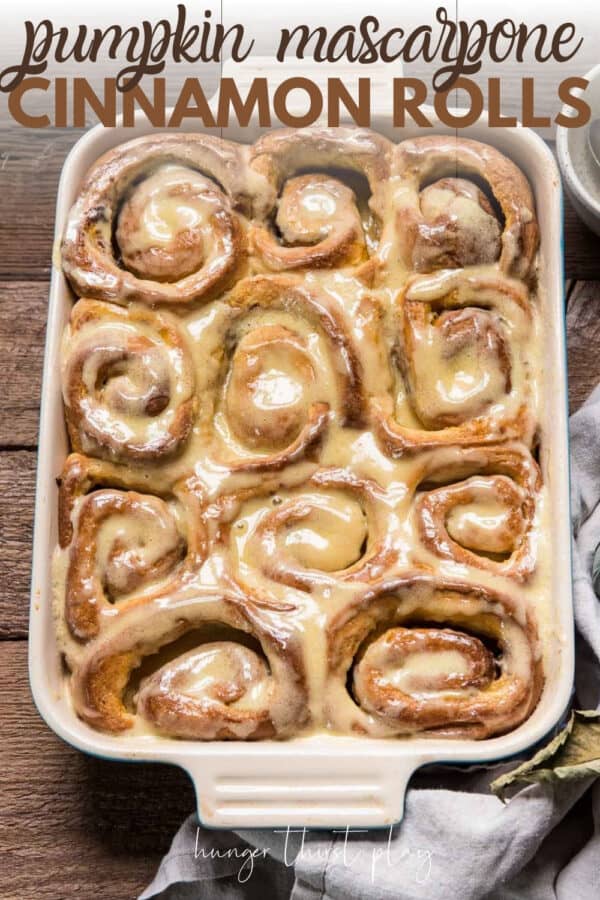 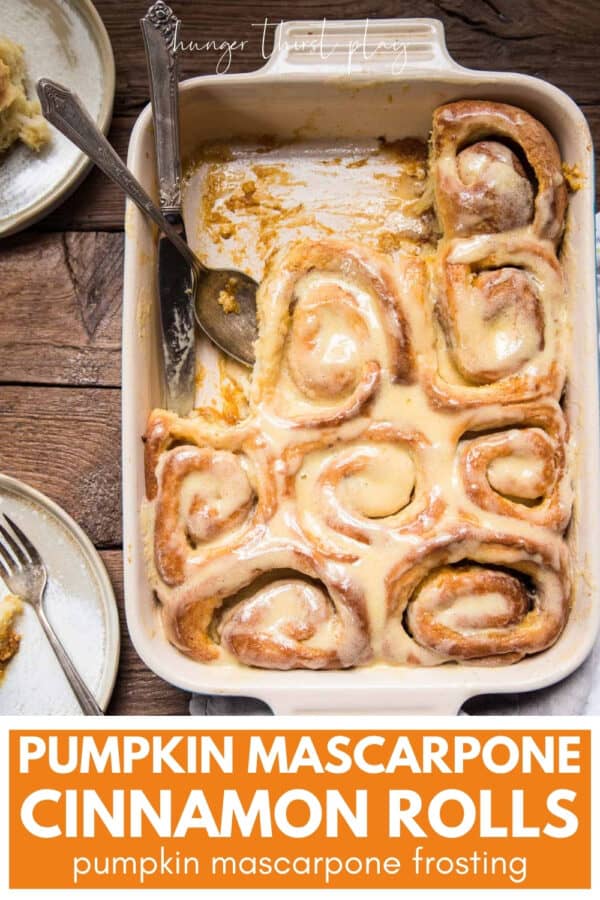 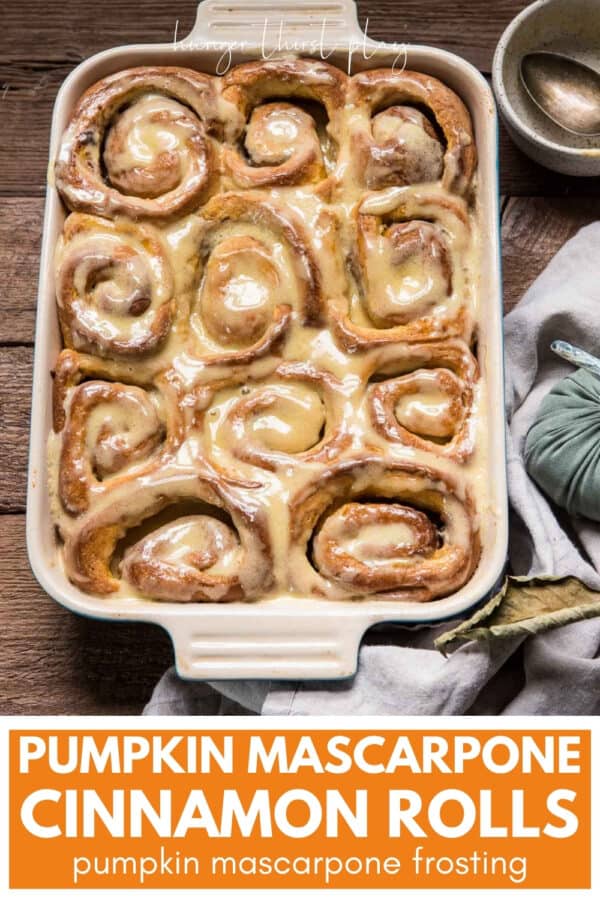 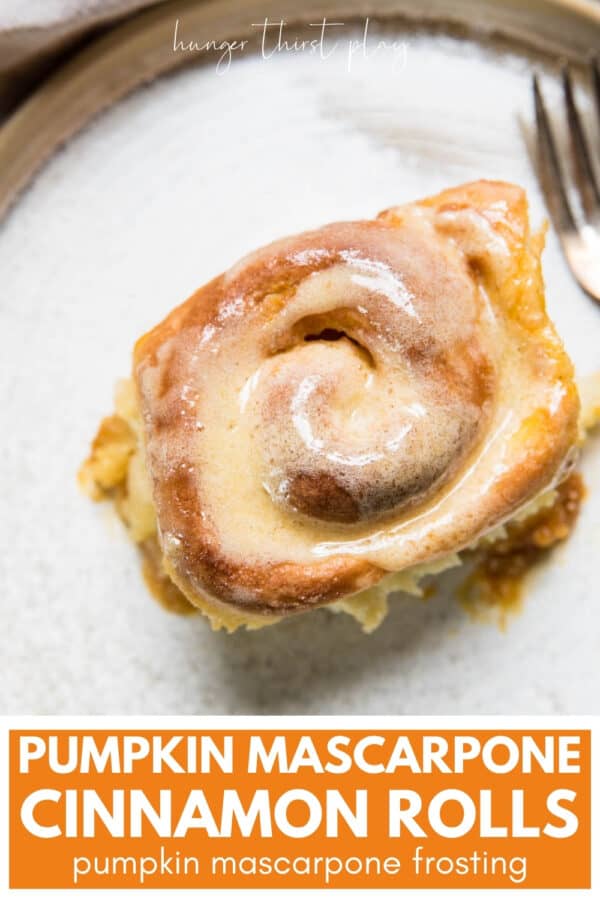 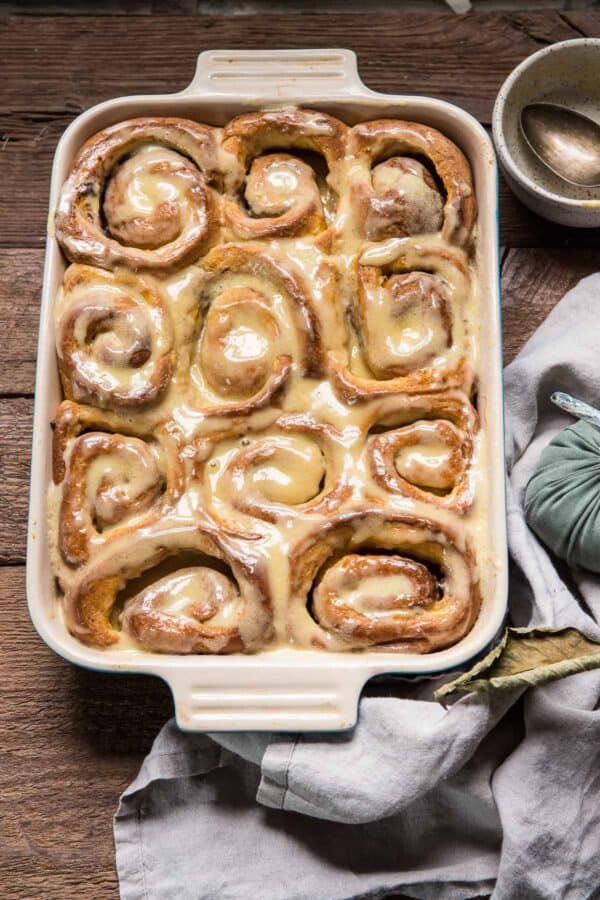 Never not wanting to make pumpkin things over here. But also, cinnamon bun type things. Fresh cinnamon rolls are nostalgic for our family and while there is zero shame in popping open a can of those premade goodies, the fancy feeling of frosting drenched homemade rolls is a true delight.

We love classic cinnamon rolls, tiramisu inspired rolls, gingerbread ones, and savory garlic and cheese ones, too. So it only makes sense that we welcome pumpkin to the family right?  Seriously...if you ever wanted to know what it tastes like if pumpkin pie and cinnamon rolls had a baby, it's right here.

What's to love about the pumpkin mascarpone twist on the classic?

Best news? It's really not that complicated. The instructions below might seem lengthy but it's broken down to be super approachable and easy to understand. 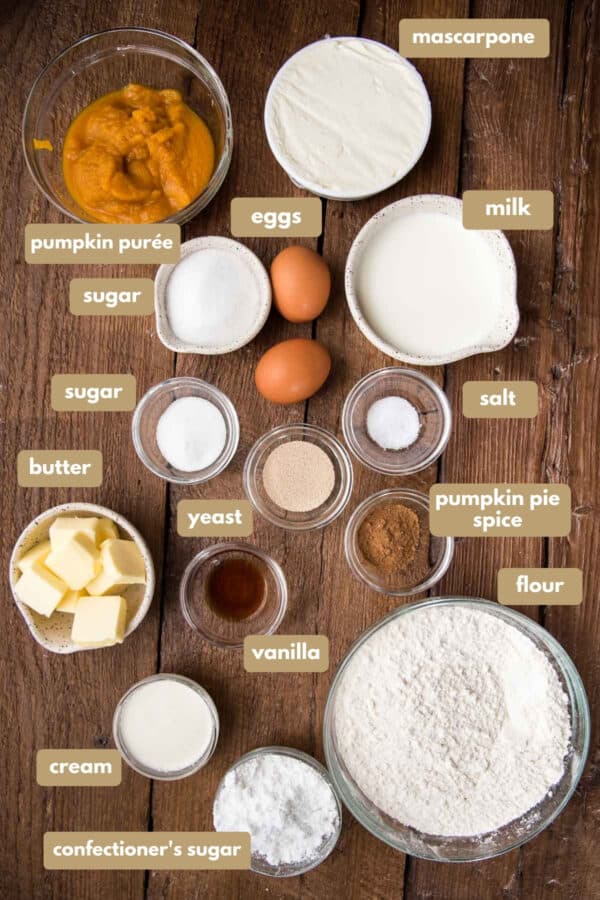 How to Make Pumpkin Cinnamon Rolls

If you're new to yeast doughs, don't worry! This is going to be great. The dough for these rolls comes together easy and is oh so soft and tender.

What you need to know about the dough:

Once the dough is doubled in size during the first rise, roll it out into a rectangle about ½ inch in thickness, about 12x18 in size. Brush with butter, sprinkle with sugars, spread the pumpkin, sprinkle the spice, and dot the cheese. After filling, roll the long side of the dough tightly. 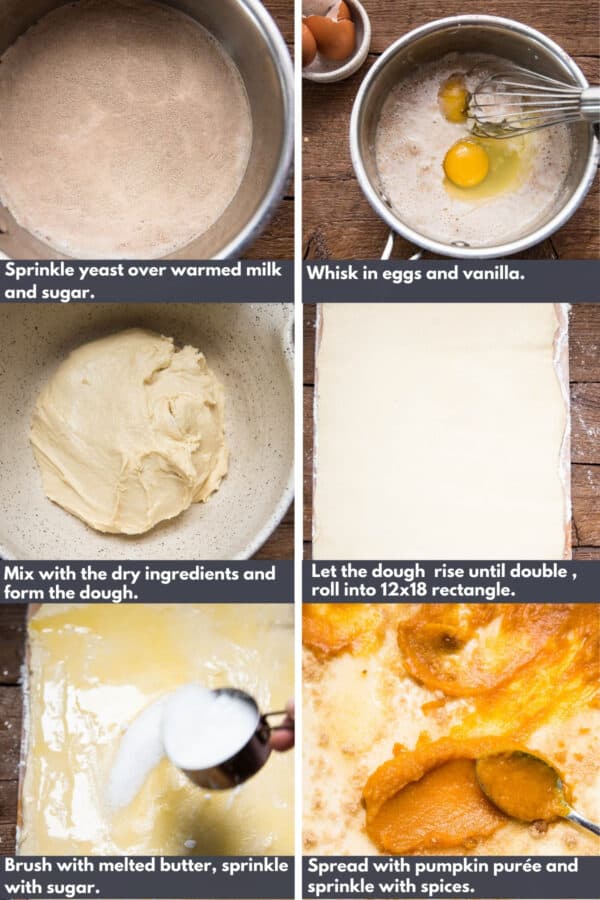 How to Cut Cinnamon Rolls

There are two ways to cut cinnamon rolls depending on what you have available. My favorite way is to use unscented dental floss or thread, sliding it under the rolled dough, crossing the strings, and pulling to cut through. Your other option is to use a sharp serrated knife cutting gently. Cut the rolls roughly 1 ½ inches thick and place in a greased baking dish.

Tips for the second rise

Allow the dough to rise a second time until thick and fluffy before baking. If the house is on the colder side, I like to set the dish on top of the stove while the oven preheats.

For a faster second rise, you can place the covered baking dish in the oven, preheat the oven to 200°F, turn it off, and leave the door open a crack. This should cut the second rise time in half.

Do you have to use mascarpone?

Cream cheese is a great substitute for mascarpone cheese. Mascarpone is a little lighter and milder. Substituting cream cheese will give a bit more tang to the flavor. Alternatively, you could leave the cream cheese or mascarpone out altogether and they will still come out perfect!

If leaving out for both the rolls and the frosting, you may need to add a little more cream cheese and confectioner's sugar to account for the missing mascarpone. 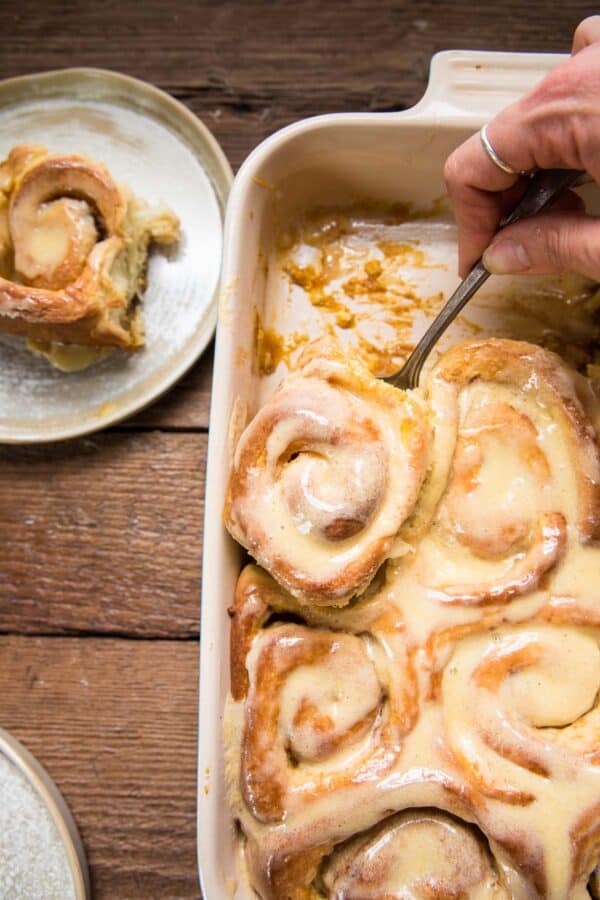 The trick to this frosting is to make it stabilized before adding in the pumpkin. Because the mascarpone cheese is so delicate, adding the pumpkin purée can be a little tricky. If you're unsure, you can always leave it out.

Whip the cheese before adding the sugar, vanilla, and heavy cream leaving the pumpkin purée for the end.

If your frosting does separate, you can place it in a heatproof bowl over a double boiler (aka s saucepan with simmering water) and whisk it to until it comes back together. 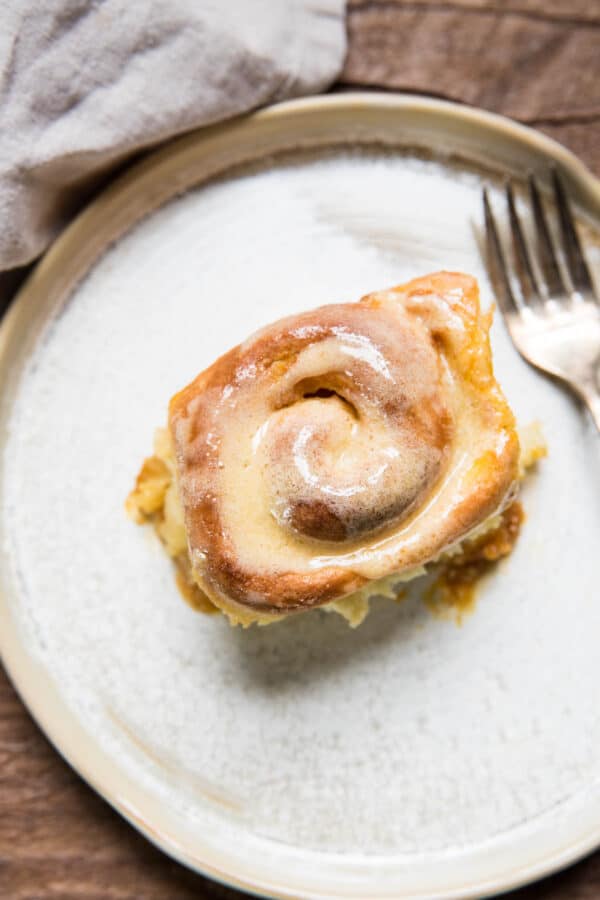 Be sure to frost the rolls nice and hot! Making the frosting drippy and gooey and absolutely drool-worthy.

These rolls are best served immediately. If you are making them in advance, wait to frost the pumpkin cinnamon rolls. Warm them up and frost the rolls before serving and watch them disappear!

Did you make this recipe? Be sure to leave a comment and rating below! 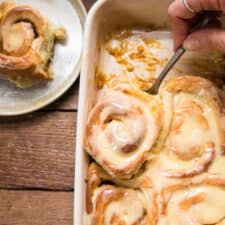