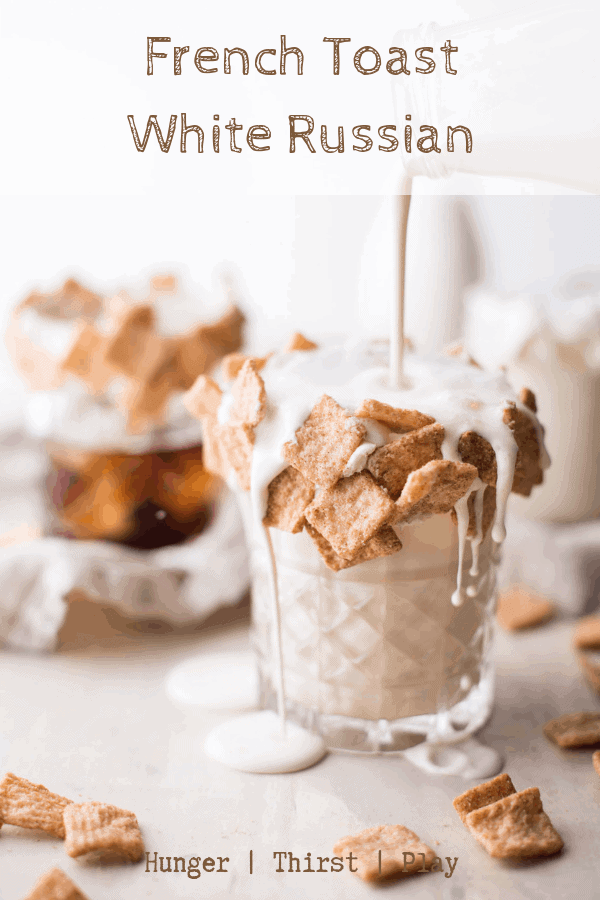 Looks like we've made it through another week. Cheers to that my lovelies! Whether this post is hitting you on Friday or Saturday morning - or what the hell, Monday afternoon - let's toast the day properly with a cinnamon twist on a classic creamy cocktail - here's a French Toast White Russian for you my friend. 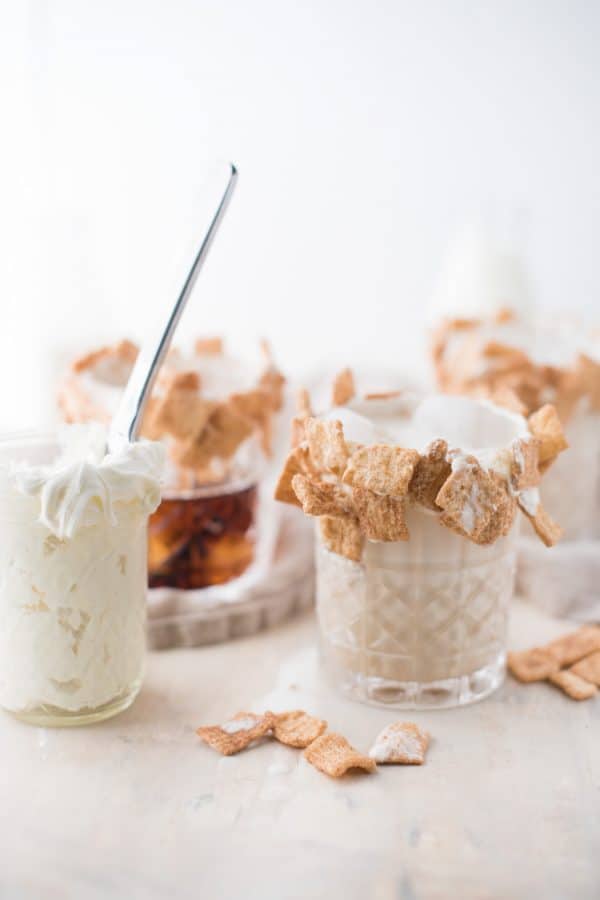 I'm on the fence whether the best part about this is 1.) the booze, 2.) the frosting, or 3.) the cinnamon toast crunch cereal throwback rim. Gah, it's hard to choose. Let's have all three.

The Big Lebowski, Iceland, and all the cocktails in between

Do you know The Big Lebowski? That movie that flopped at the box office but became a cult classic over the years. If you don't know it, you should. Quotable and totally inspiring to drink White Russians and rock a sweet bathrobe all day everyday. Which you can do, in Iceland. The White Russians, maybe not the bathrobe.

No, but for real. One of our favorite stumbles on a trip to Iceland was prevailing up The Lebowski Bar in downtown Reykjavik. Over 20 different styles of White Russians on the menu decked out with bowling decor abounds. While there are hundreds of natural wonders to see in Iceland, the Lebowski Bar is a tasty one any cocktail lover should seek out. 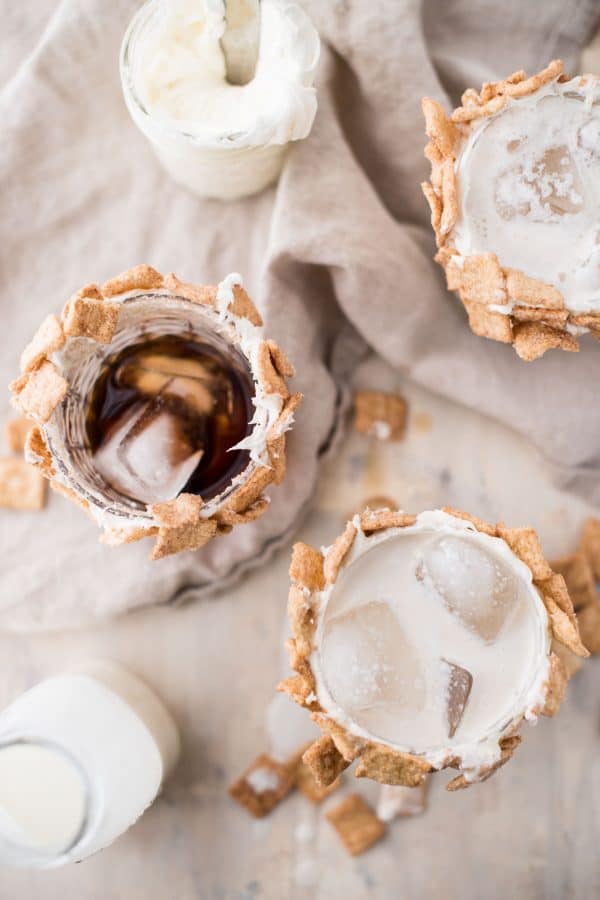 Brunch drink, after dinner drink, when you want something sweet drink - this French Toast White Russian fit the bill for many occasions.

Serving this up for brunch? Try these easy peasy Peach and Burrata Toasts to go with it. They legit take about 5 minutes and just need a quick toast. Make the most of blood orange season while we're in it with this Blood Orange Mascarpone Tart. But, let's be honest, I'll be over here picking the frosting covered cinnamon toast crunch off my glass and snacking on that. 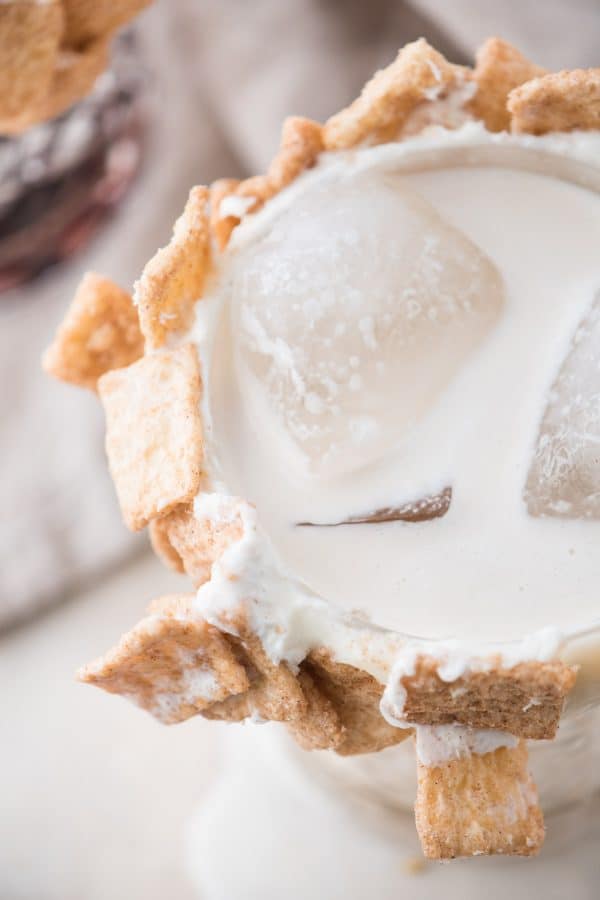 What gives the French Toast White Russian it's cinnamon-y kick is the cinnamon whiskey, and it doesn't take a lot! Already a strong cocktail, just ½ an ounce will add a firey kick mellowed out by creamy goodness. Fireball is typically the most available, but there are a few other brands out there worth trying. Flaming Leprechaun is a local Boston brand I'd highly recommend trying to you see it. Lots of cinnamon flavor and just sweet enough without that chemical and cloying aftertaste.

Of course you can't forget the other important parts that make this French Toast White Russian - vodka and kahula. Providing a strong punch and underlying coffee flavor. When it comes to the creamy part, that decision is up to you. Typically, the traditional White Russian is made with heavy cream. Personally, I prefer mine with milk. Either way you can't go wrong, it's a drink that...well let's say...it really ties the room together. 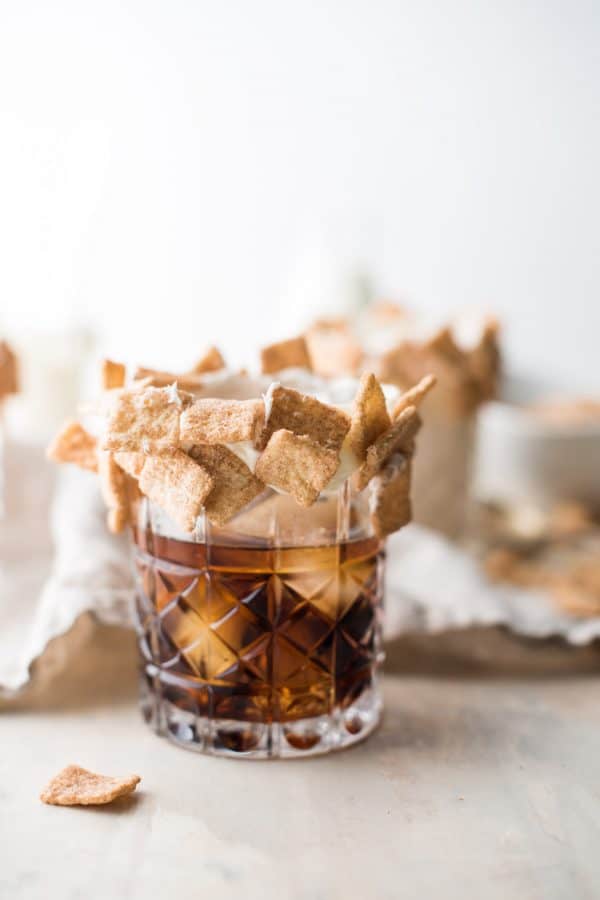 Did you try this recipe? Tell me about it in the comments! 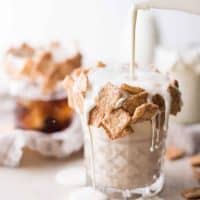 *Typically, I make my White Russians with milk, but the traditional recipe calls for cream.