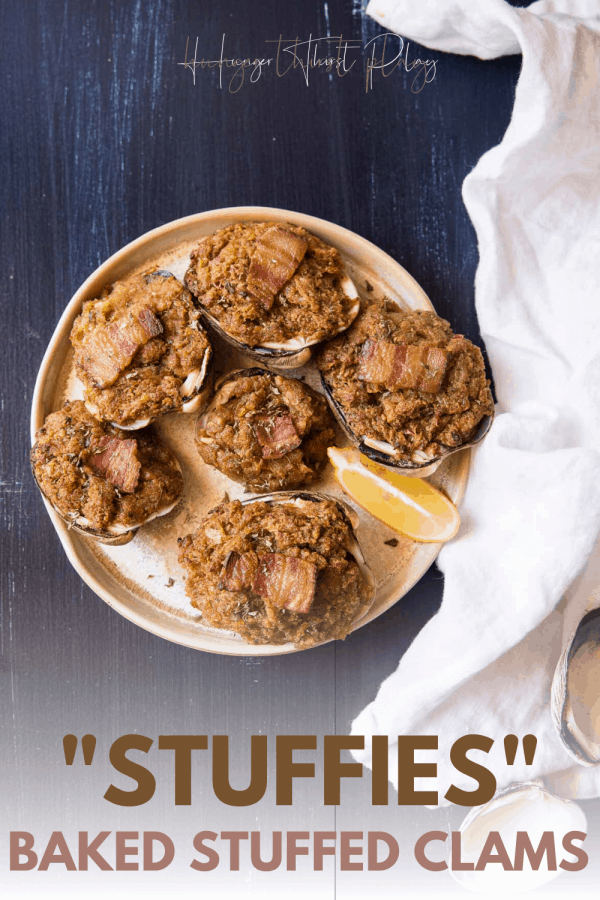 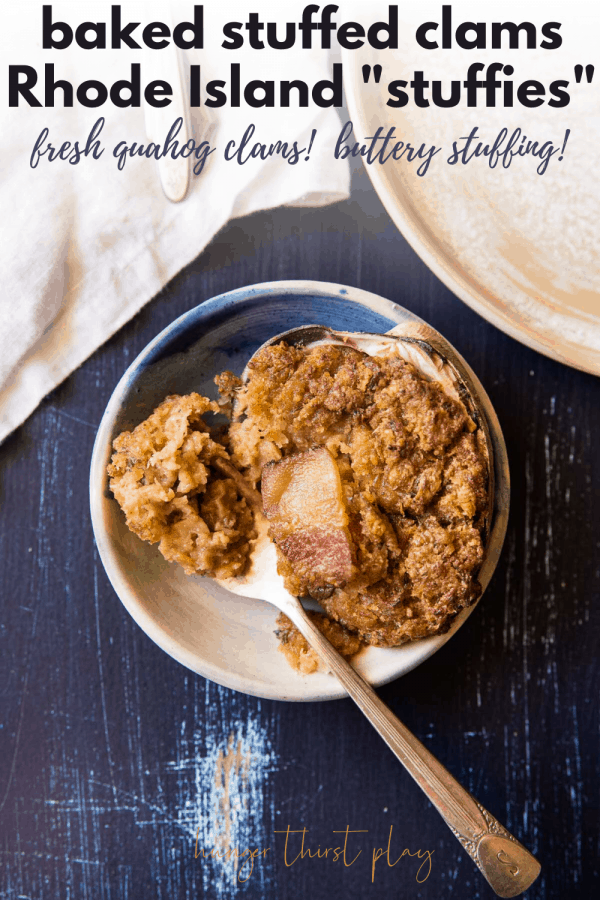 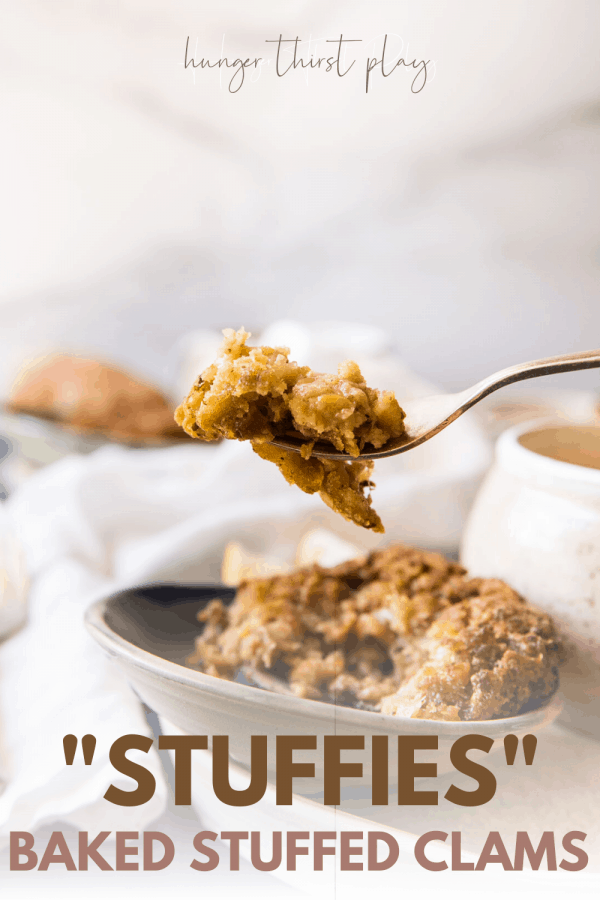 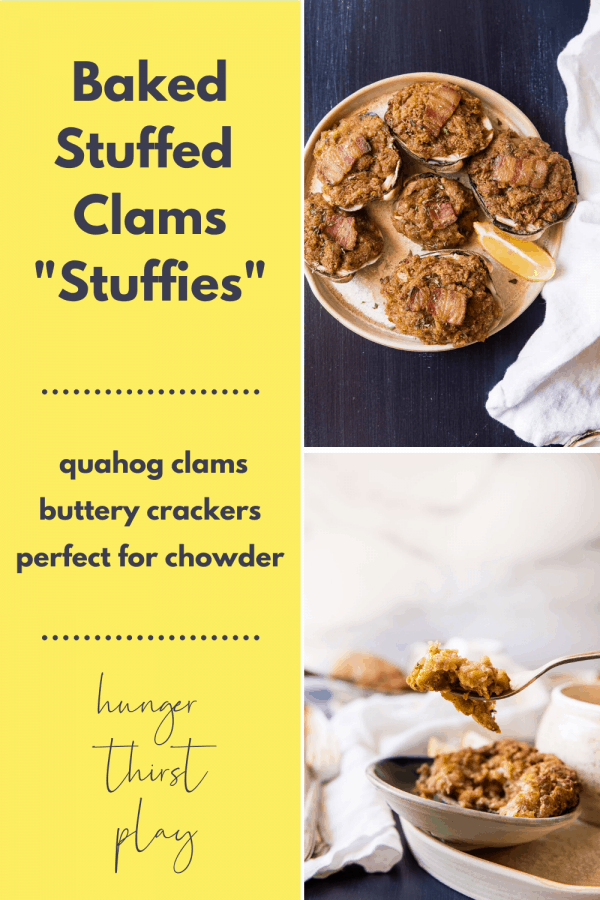 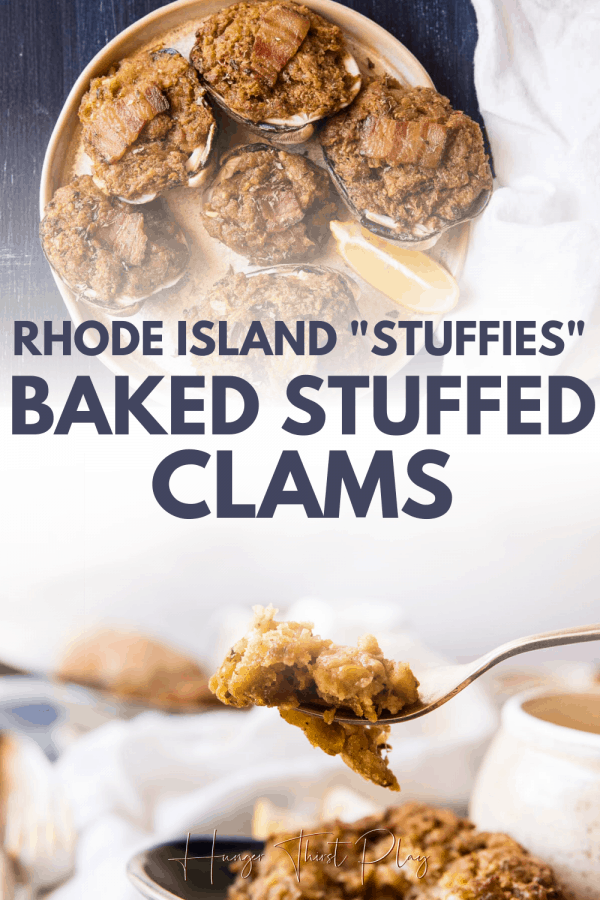 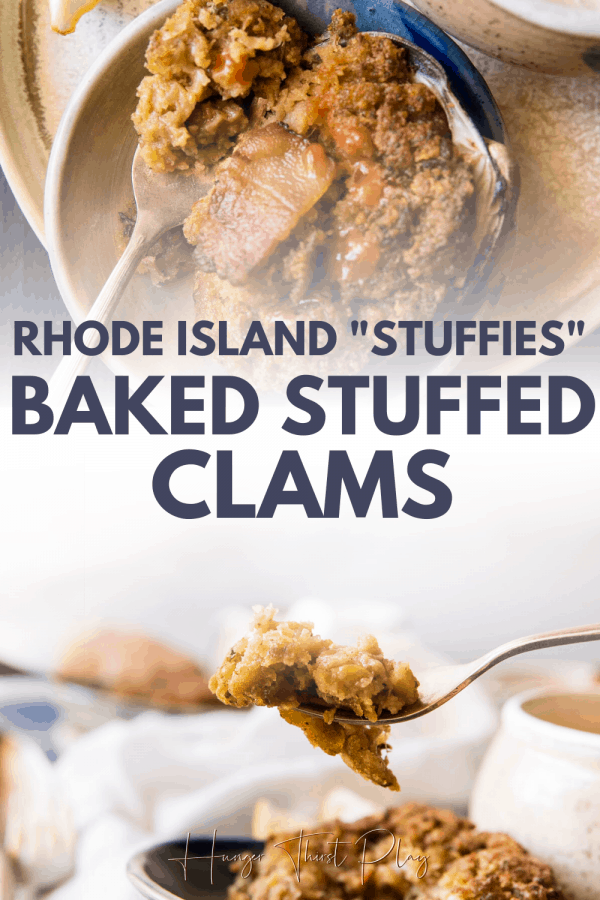 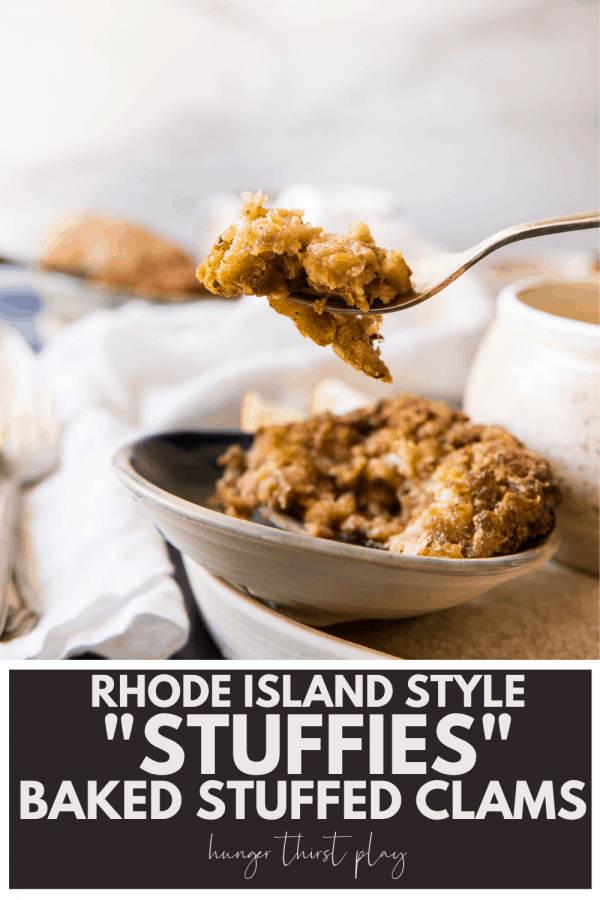 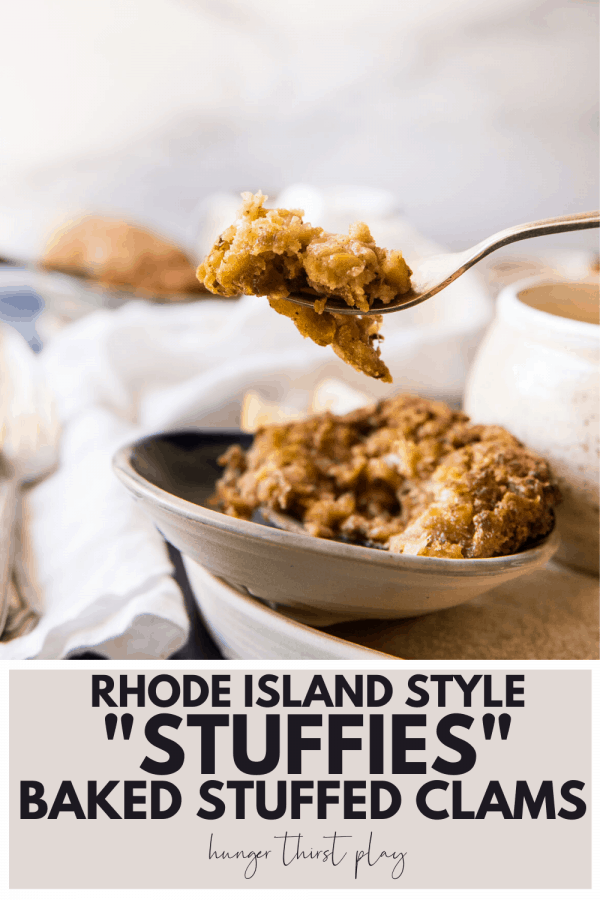 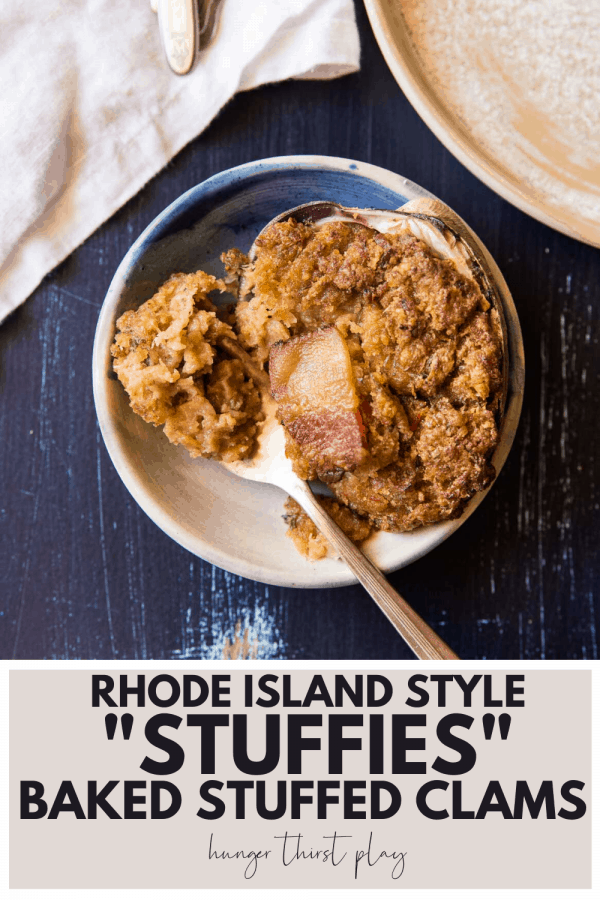 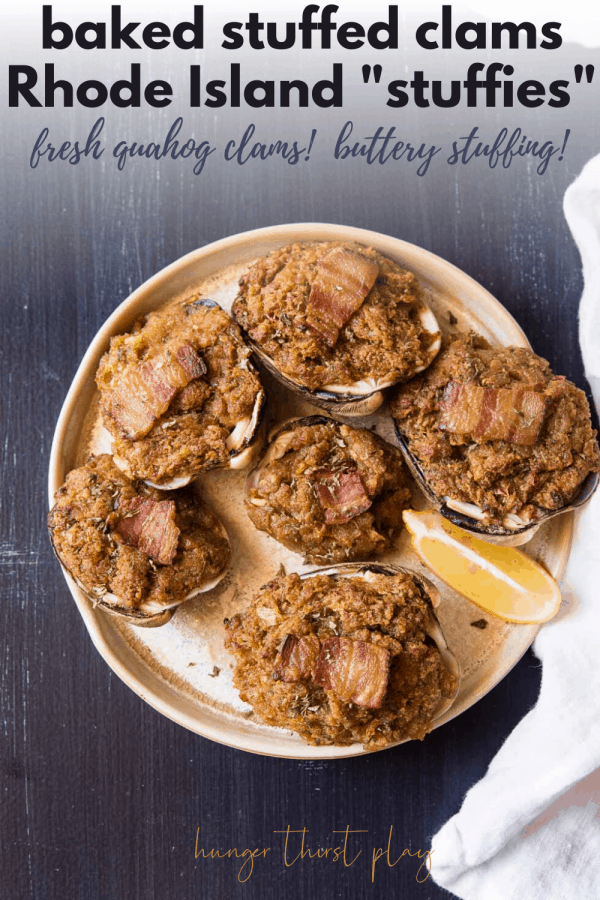 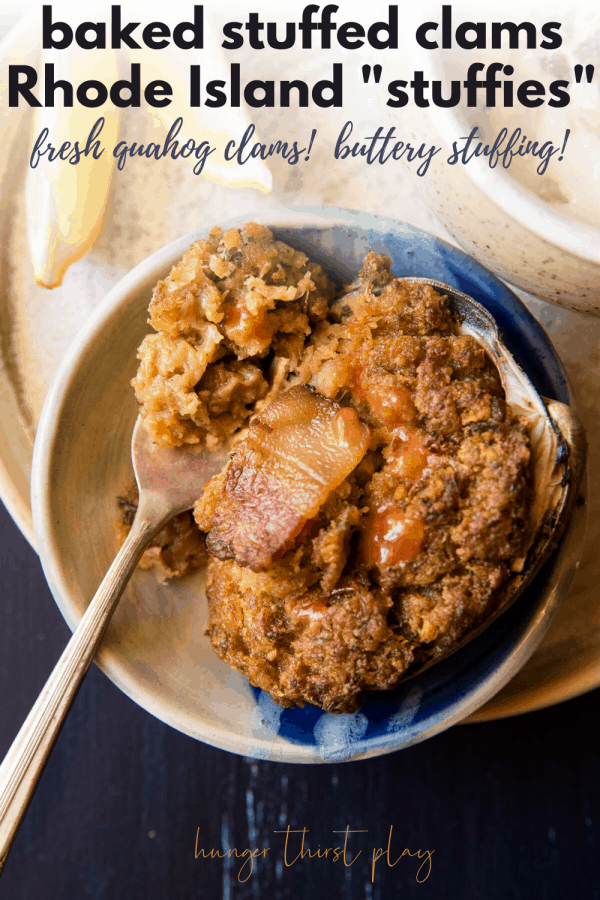 It's not summer until there are stuffies and chowder!  Baked stuffed clams are a New England - and specifically Rhode Island - favorite with fresh chopped quahog clams, buttery crackers, sauteed vegetables, and just a touch of briny sea flavor! 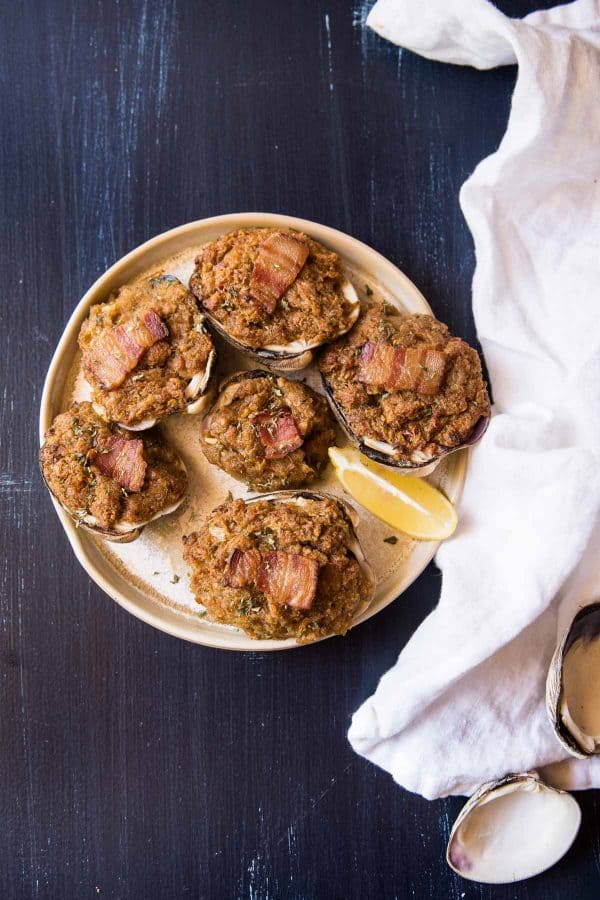 If you know, you know.  And if you don't know, you're about to find out what you've been missing your whole life when it comes to summertime New England seafood eats.

I mean it, PUT DOWN THE STORE BOUGHT STUFFIES DARLING.  While, sure, they'll do in a pinch, but nothing compares to homemade.  You'll fall in love with these baked stuffed clams for a few reasons but mostly these.

Break out the food processor (affiliate link), roll up your sleeves and let's dig into classic New England seafood prep! 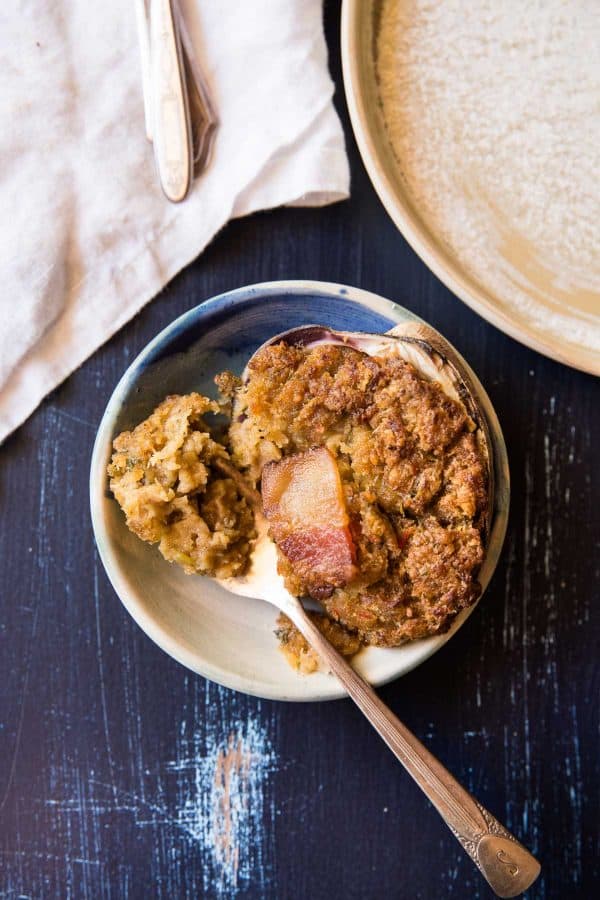 You know how different parts of the country call the same thing different names?  In some parts it's "soda" or "cola" or "pop."  Well, cross the border into the smallest state in our nation and baked stuffed clams are stuffies.  It's as simple as that.

What type of clam should you use?

Traditional stuffies are made using a quahog clam.  The clam itself is bigger and meatier, as well as the shell.  Bigger shell, more baked stuffed clam stuffing.

While you can definitely make baked stuffed clams using cherrystones or smaller hard shell clams, the quahog is going to give you the most clam per shuck. 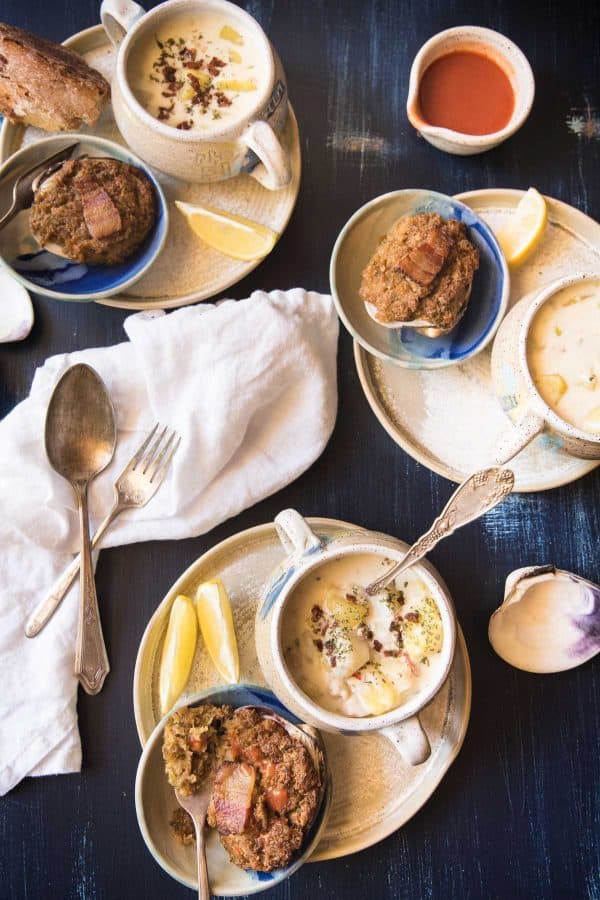 The first and most important step is cleaning the quahogs!  You want to make sure the shells, especially if freshly dug, are cleaned really well on the outside.  What a bummer it would be to put in all this effort only to end up with gritty bites of sand here and there.  But then, well, if you're used to eating meals at the beach maybe it won't bother you too much.

Once the clams are scrubbed on the outside using a brush or clean sponge and cold water, you'll need to cook them.  Fill a large pot halfway with water and aromatics like onion, bay leaf, and peppercorn - or you can use just water, it's a personal choice.  Once the water gets to just a boil, add the cleaned clams and cook just until the clams have opened about 6 to 10 minutes.  Remove the clams from the water, reserving 2 to 4 cups of broth to be used in the stuffing.

As a reminder from my favorite movie ever, the wise Amber Atkins once said, "Mom always says, "Don't ever eat nothin' that can carry its house around with it. Who knows the last time it's been cleaned."

While it's not going to stop me from enjoying seafood, we do need to keep a few seafood prep tips in mind. 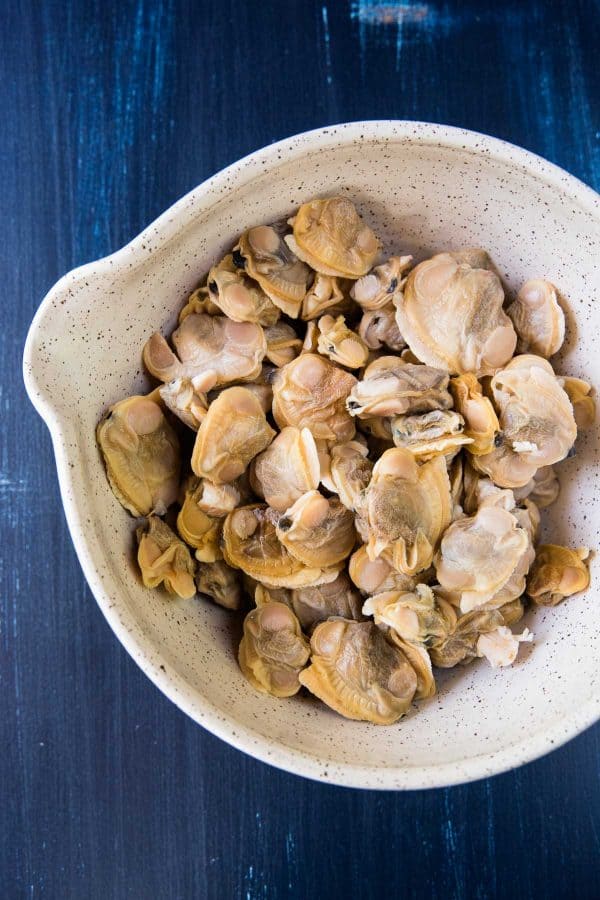 Okay, on to the baked stuffed clams.

Really, once the clams are cooked and shucked the rest is so easy because the food processor is doing all the work.  Pulse the clams and set aside.  Pulse the veggies, give em a cook.  Pulse the crackers and melt the butter.  Then in a large bowl combine the veggies, clams, spices, and crackers then slowly add the clam broth and melted butter to the stuffing mixture until it's thick, wet stuffing.

If you've ever made Stove Top stuffing, you want it a little wetter than that...kind of like thick paté.  Then you scoop all that seafood goodness into the clamshells pressing firmly into the shell.  This particular job used to be my opening sidework at one of the first restaurants I ever worked at, so I'd like to call myself a bit of an expert at stuffie stuffing. ::insert hair flip:: 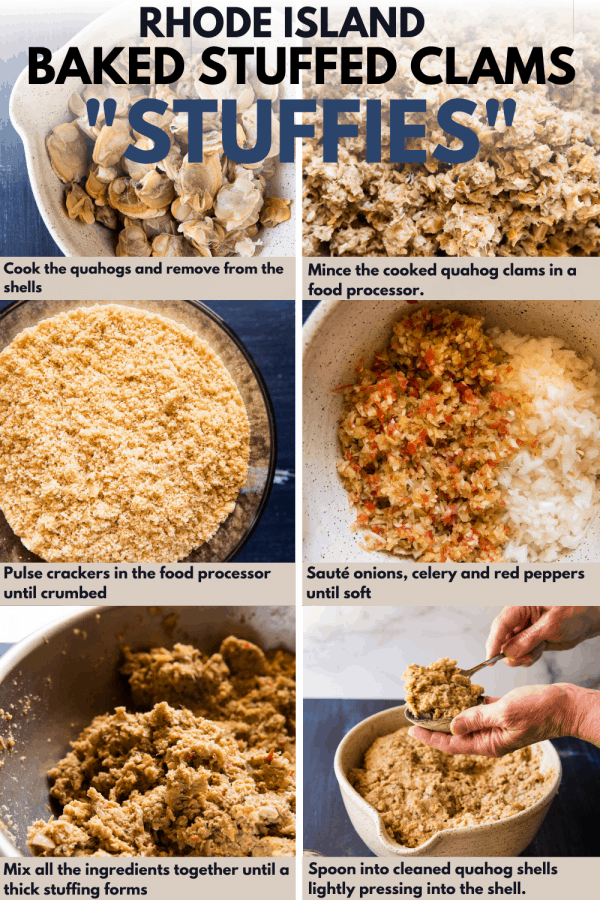 After stuffing, you have an important choice to make.  You can either top each stuffed clam with a piece of bacon for added richness and a little smoky flavor or bake without!  Both options are great. 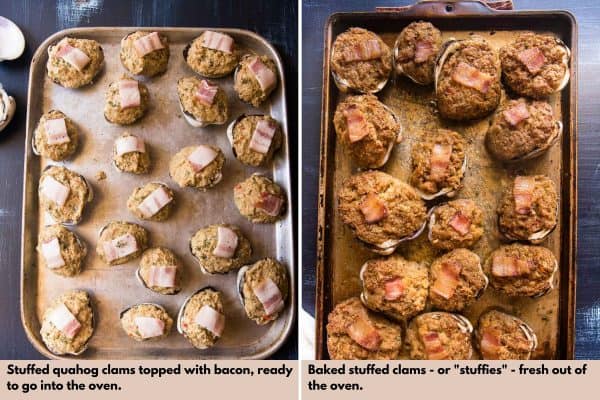 Also, if you're a fan of spice, don't forget a few drops of Frank's red hot or tabasco on top! 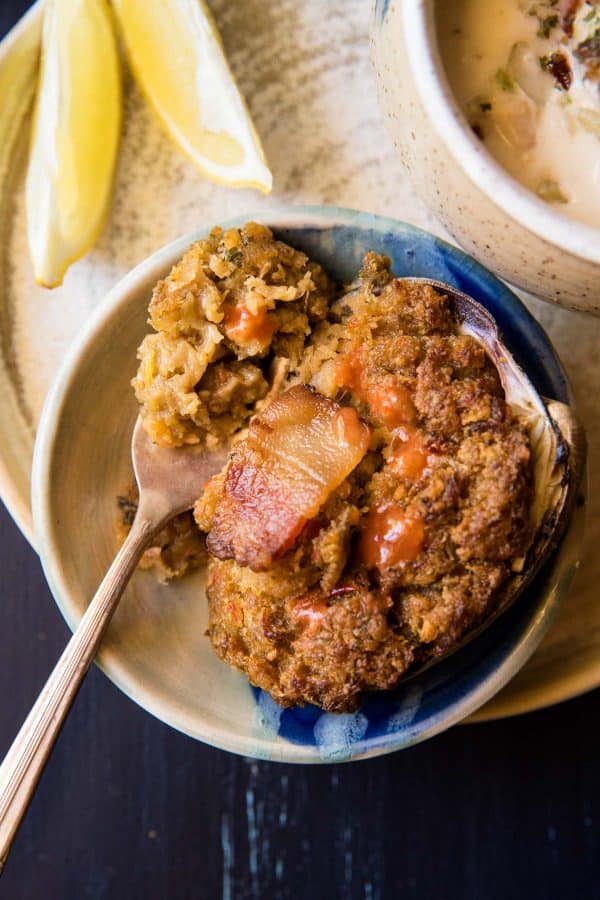 What to serve with baked stuffed clams

Any sort of seafood dish is a great pairing for baked stuffed clams!  Truly, these stuffies are the best alongside New England Chowder or as an appetizer before steamed lobster or fish entree.  I like to just pop 'em in the toaster oven whenever I get a craving for summertime or seafood.

Can you freeze them?

Yup! You betcha.  This recipe makes a fair amount so these are great for summertime barbecues and get-togethers.  The recipe can easily be cut in half or you can freeze the prepared stuffies - unbaked or baked - and just cook them from frozen when the craving arrives. 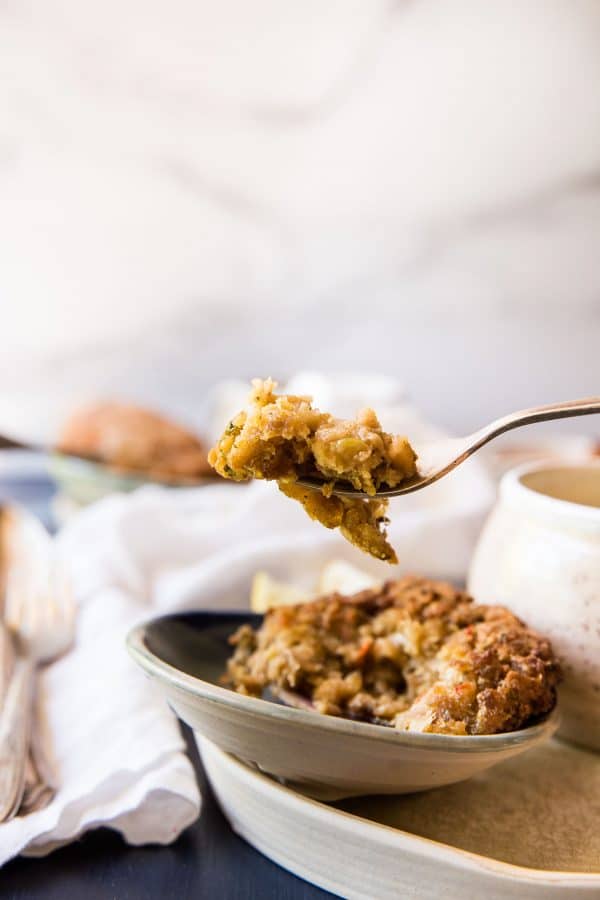 If you loved this recipe, let us know if the comments and leave a rating!  What do you eat with your stuffies?  Be sure to let us know and show us your tasty creations tagging #hungerthirstplay on social media. 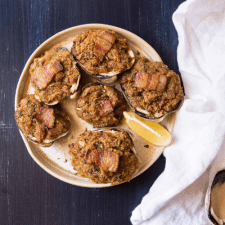 To Cook the Clams: