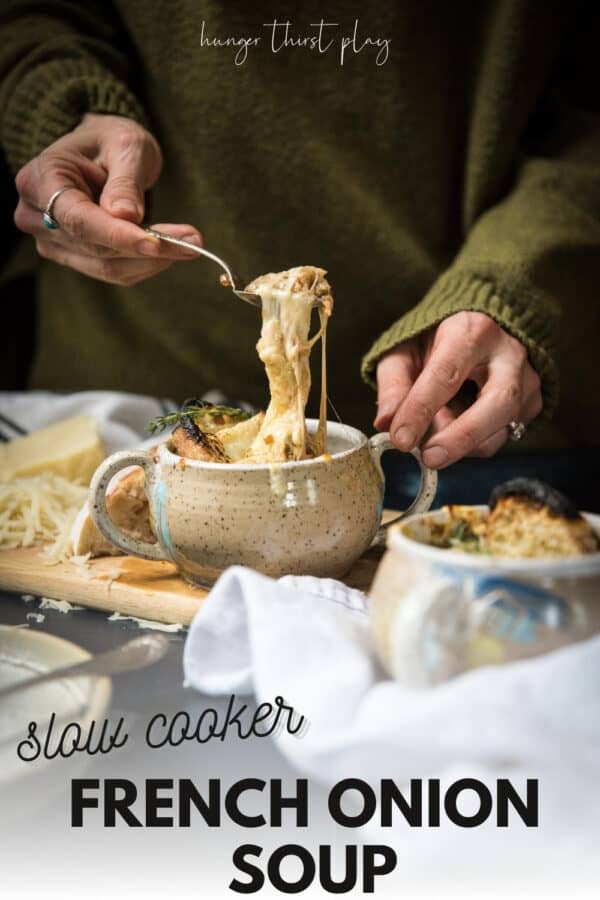 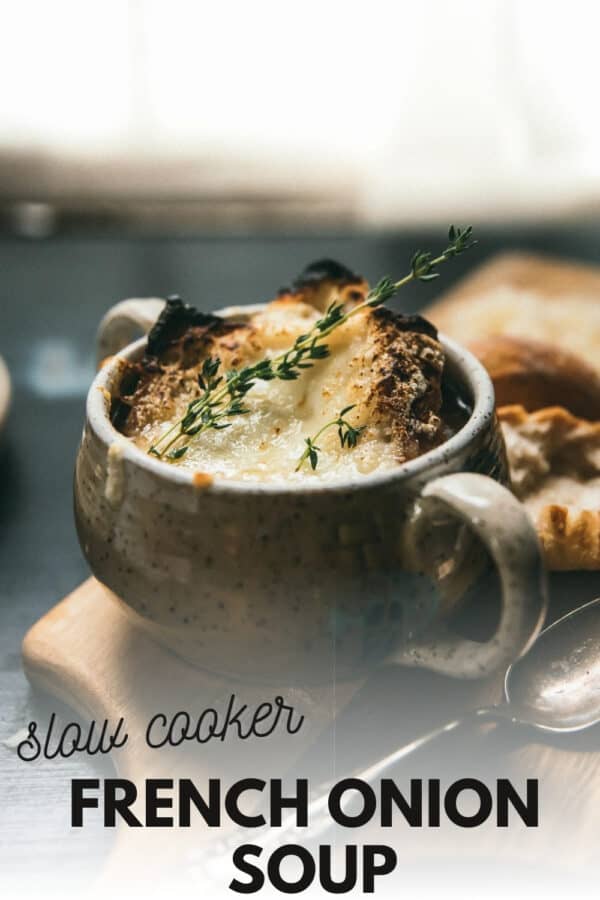 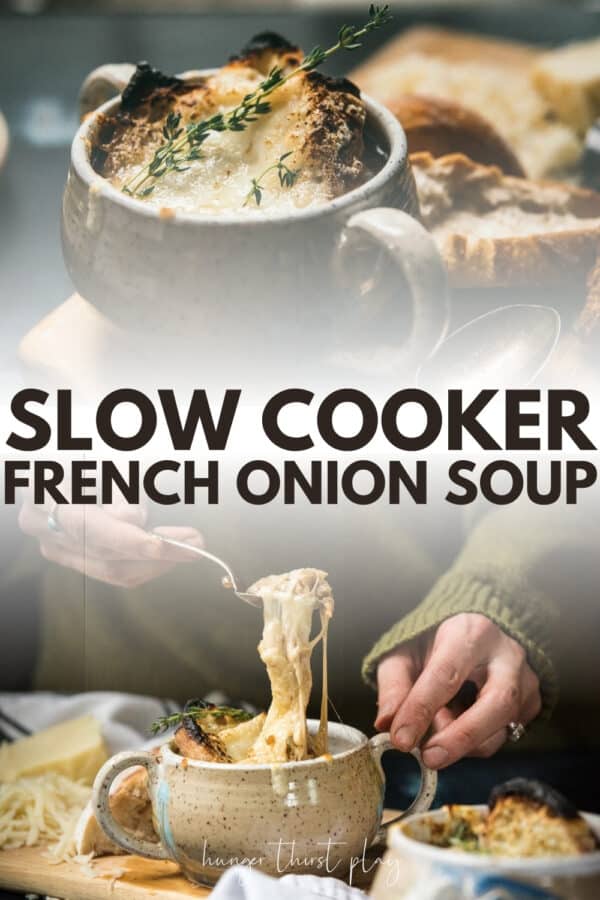 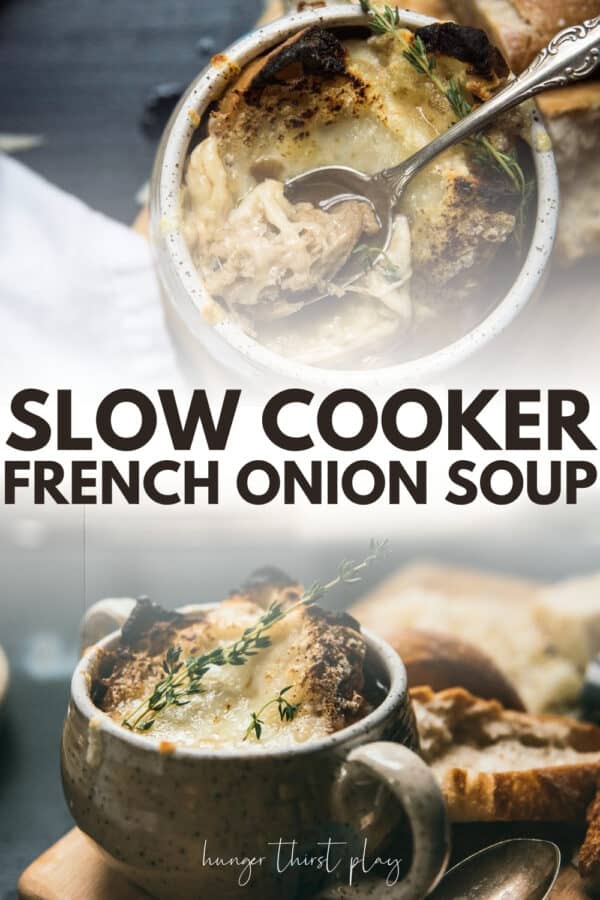 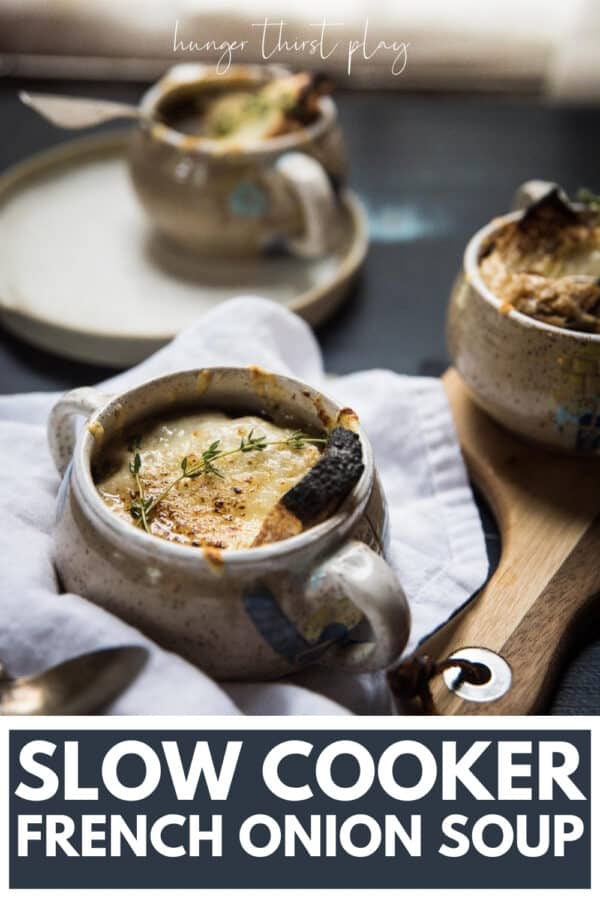 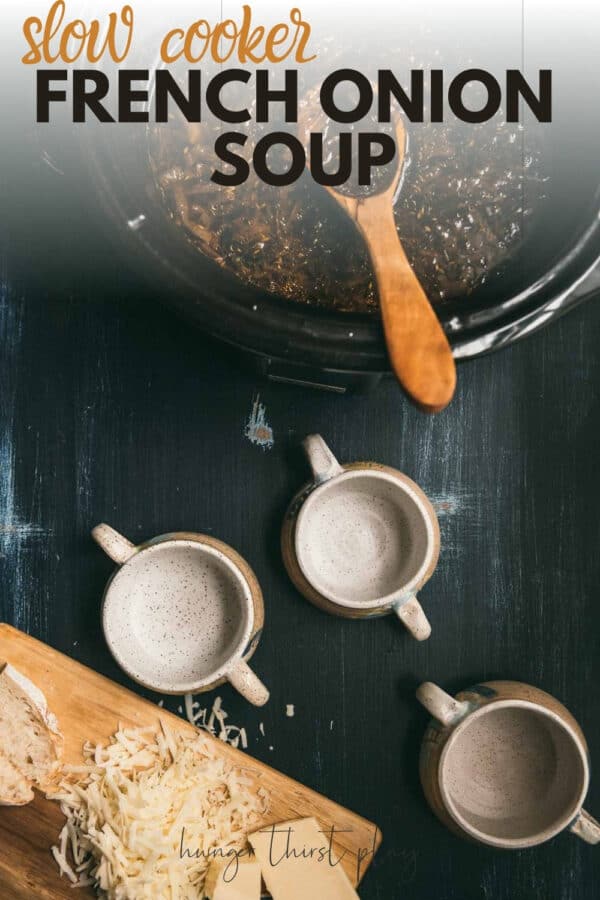 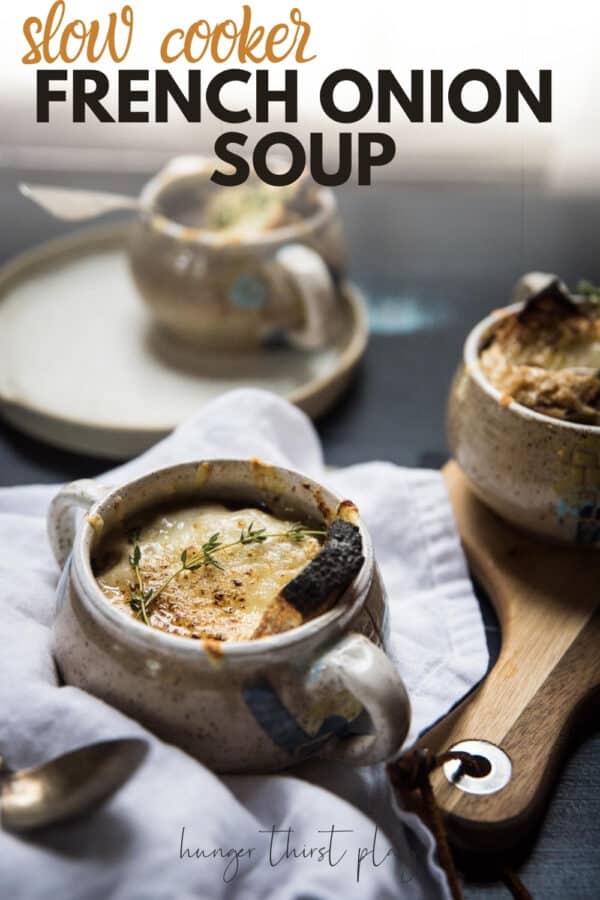 Slow cooker French onion soup is the most delicious way to enjoy this bistro classic while hitting the easy button at the same time! Simply caramelize the onions overnight, let the soup cook all day in the slow cooker, and come home to mouthwatering results. 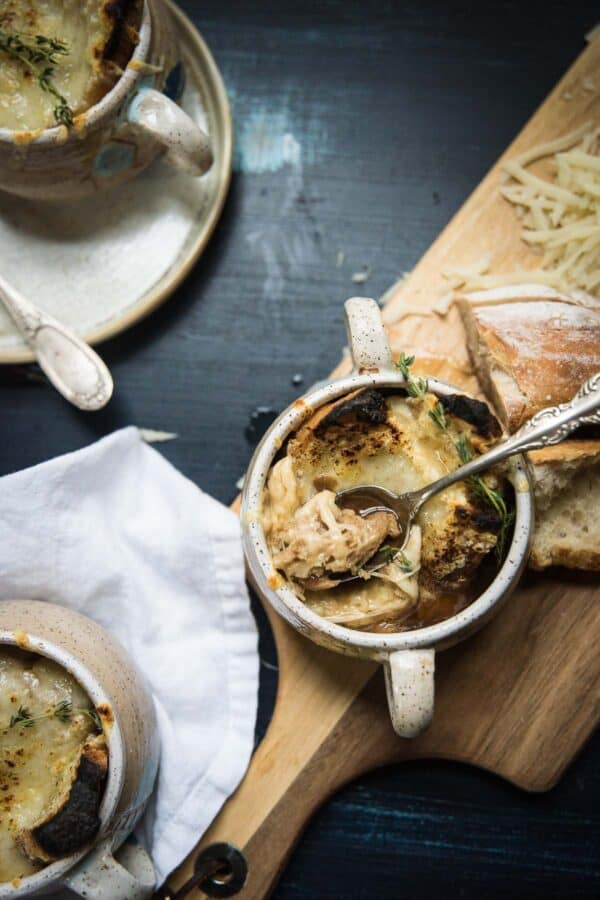 Just going to hang out over here, living my best soup lady life. It's just so good, especially this rich, savory, toasty bread and gooey cheese french onion soup that is absolutely ridiculously easy to make.

Here are the major loves going on in each bowl of comfort: 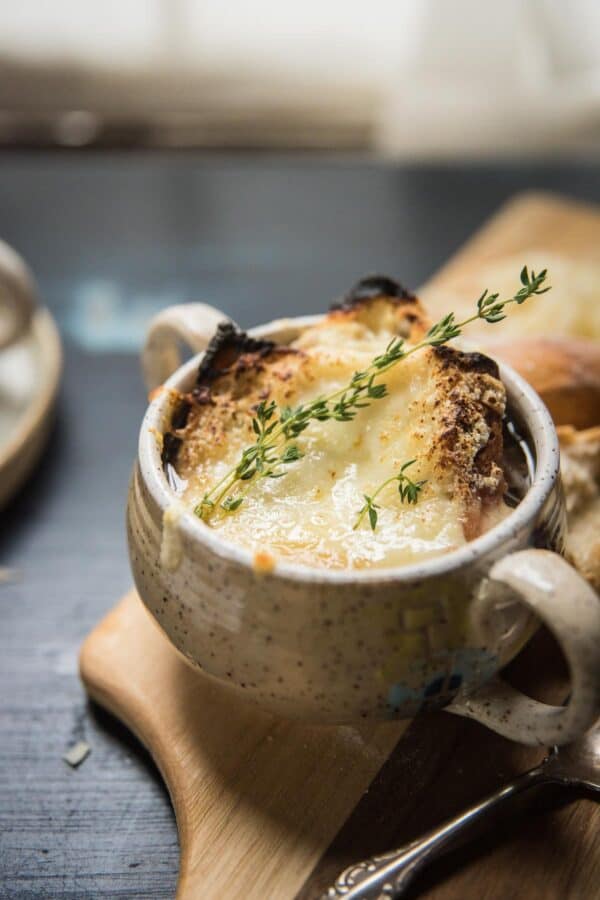 Normally French onion anything can elicit a sigh of "ok, it's going to take a while but it'll be worth it." Except for this time we're calling in the slow cooker for reinforcements and everything practically makes itself!

True caramelized onions are a labor of love, cooked slowly over low heat in equal parts butter and oil with a generous sprinkle of salt. They're a great addition to so many meals like pizza, pull-apart bread, and of course soul comforting soup. 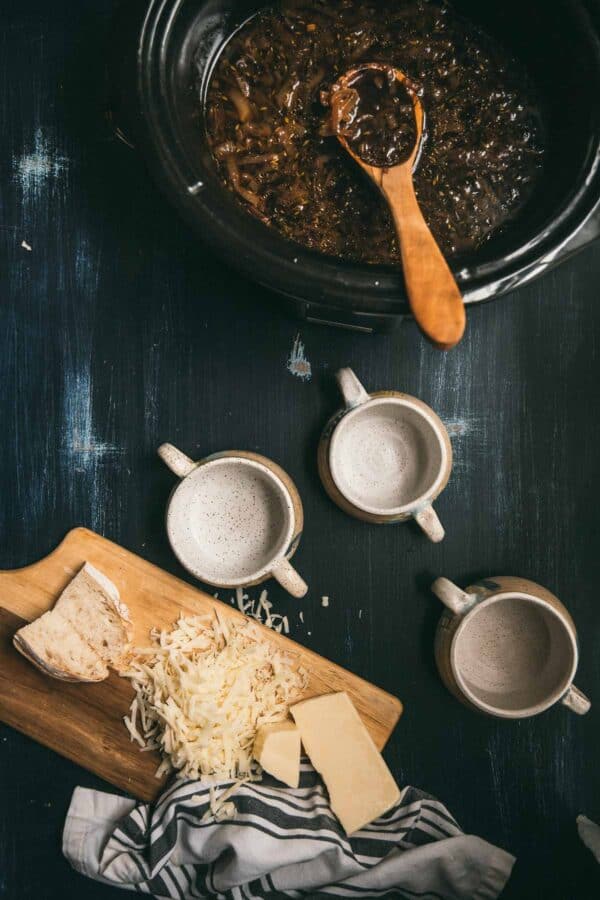 WHAT ONIONS SHOULD YOU USE?

Sweet onions are traditional and mild. They hold a good texture even after the long caramelization process. Sweet onions are recommended, but red onions and yellow onions can be used as well. Red onions will add a more robust flavor and less sweetness.

Yellow onions will be sweeter than reds with more onion flavor and are a great substitute if you can't find sweet onions.

Mild prep. Set it and forget it.

Once the soup is done, you just need to add the finishing touches of hearty bread and melty cheese! 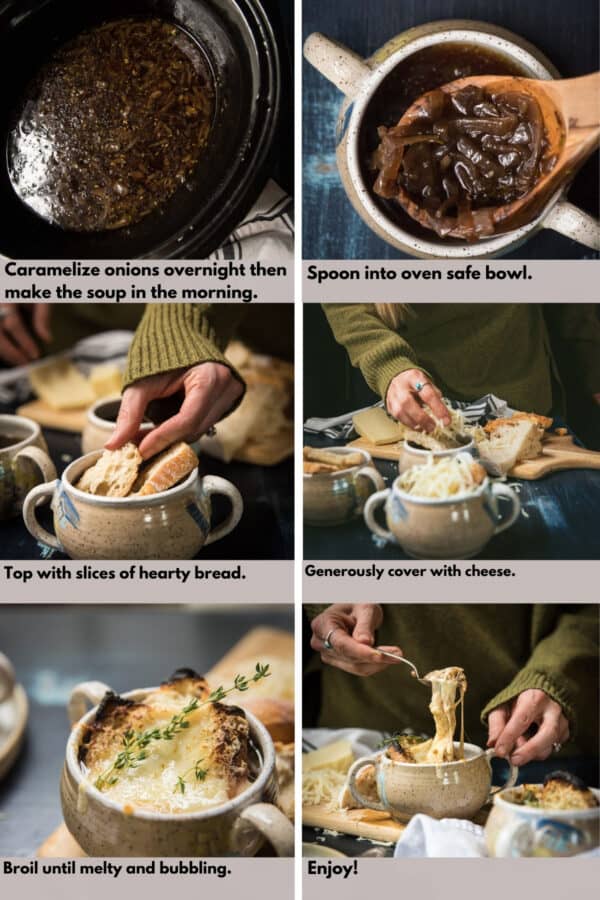 Laddle the french onion soup into oven safe bowls.  Most ceramic bowls are oven safe, but you can check the bottle of the bowl where it will usually confirm that.  Bowls or soup crocks with handles are the best option since the bowl will be super hot after broiling.  You're definitely going to want oven mits to take out of the oven, even if placed on a baking sheet.

What goes on top of french onion soup

For bread, I like to use sourdough or crusty soup bread, sliced so one or two slices fit in the bowl.  It's okay if they stick out too.  You can toast them if you don't want them too soggy, but also using a heartier bread like sourdough, baguette, or ciabatta will keep it from falling apart. 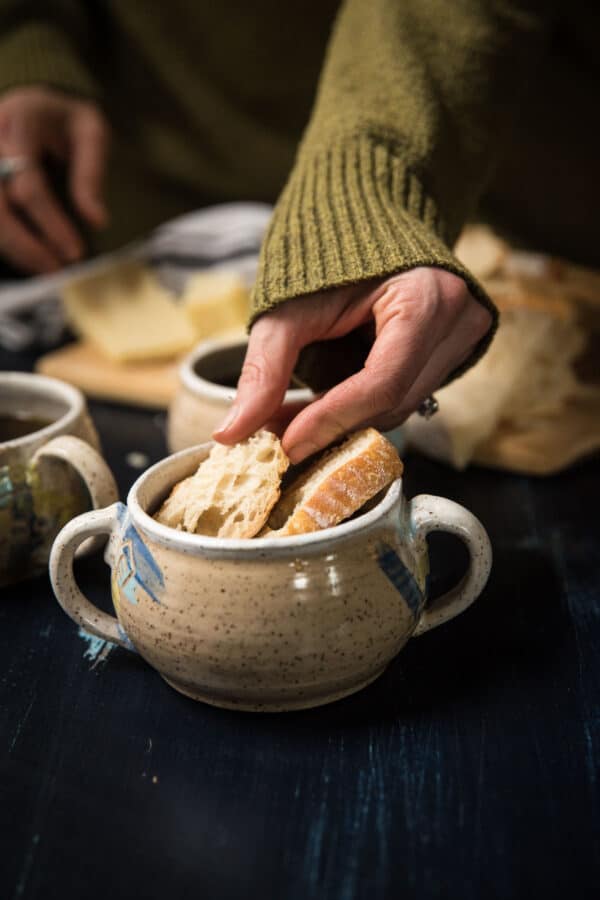 Gruyere is the traditional cheese used for French onion soup.  It's a hard, mild, and tangy cheese.  If you can't find Gruyere, Swiss cheese is a great substitute.

Layer the shredded cheese on top of the bread.  Then broil in the oven on high until the cheese is melted and browning.

Tip: Place the bowl on a sheet tray before place under the broiler.  This will make transferring in and out of the oven easier and if any of the melted cheese drips it won't make a mess of your oven!

Enjoy your hot soup right away!  If you're making this in advance, wait to add the toast and cheese and do that part right before you serve.  Whether it's making it in advance or sneaking a homemade meal in while multitasking, you're going to love the rich, fancy taste of slow cooker french onion soup without having to do any work!

Did you make this recipe?  Please leave a rating and comment below and don't forget to add a photo of your eats with the pins on Pinterest! 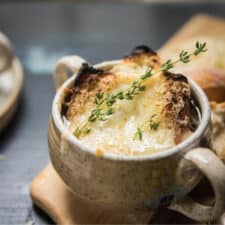