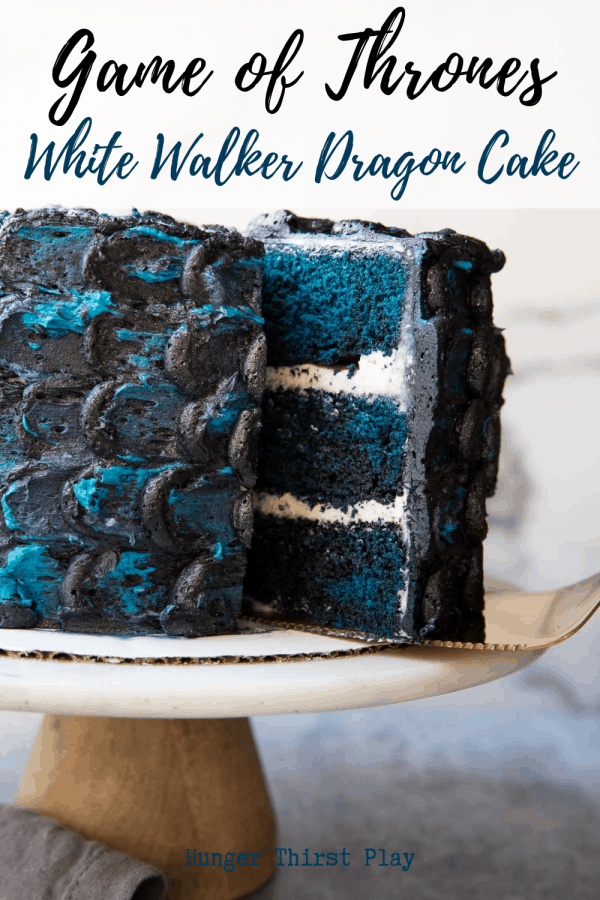 There are a lot of truths involved in this cake. Truth - I'm binging GoT while I write this posts as an excuse to get in the proper mood. Truth - there's a fair amount of food dye involved in this cake. And Truth - I am unabashedly a NERD especially when it comes to nerding about fictional sagas like Harry Potter, Outlander, and Game of Thrones. Big fan of the books gone big screen over here.

This post may contain affiliate links that won’t change your price but I may earn a commission.

So what do you do when it's the final season?! You prepare your best Game of Thrones themed food and have a viewing party with all your other GoT obsessed friends. Oh, and make put making a White Walker Dragon Cake on the list, too. 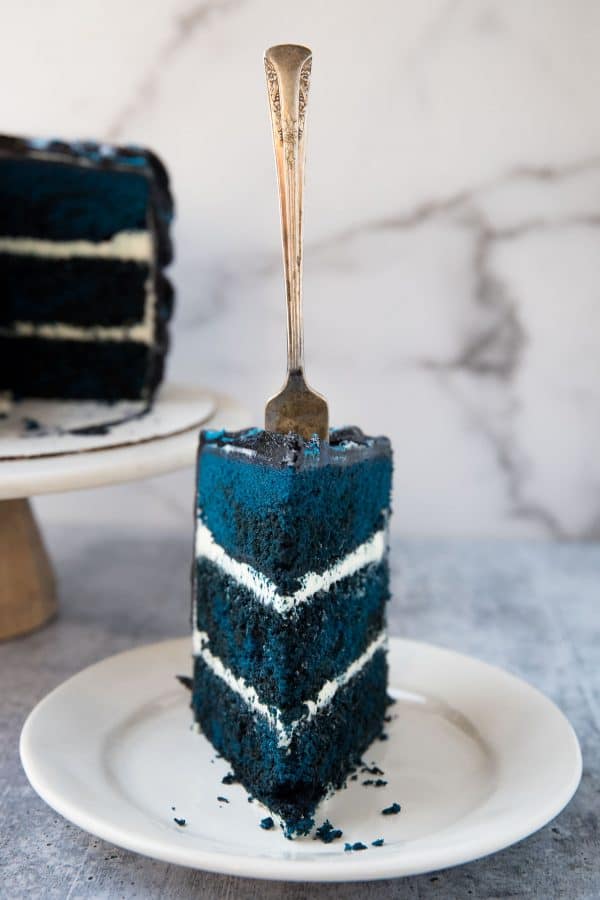 Last year for the season 7 premiere I made Liv for Cake's Red Velvet Dragonscale Cake. It's delicious and if you're a red velvet purist, I highly encourage it. But for this season premiere I wanted to up the ante and if you didn't watch the end of last season stop reading this post RIGHT NOW.

This post is literally a spoiler in and of itself starting with the title. So sorry, I guess.

Anyway, the Night King in all his creepy glory turns poor dead Viserion - Daenerys' dragon - into a wight and/or white walker (jury's still out on which one.)  Then the poor zombie dragon goes and blasts the only line of defense the living has against the army of the dead. That deserves a cake, right?

Welp it's getting one and here's how we're doing it. 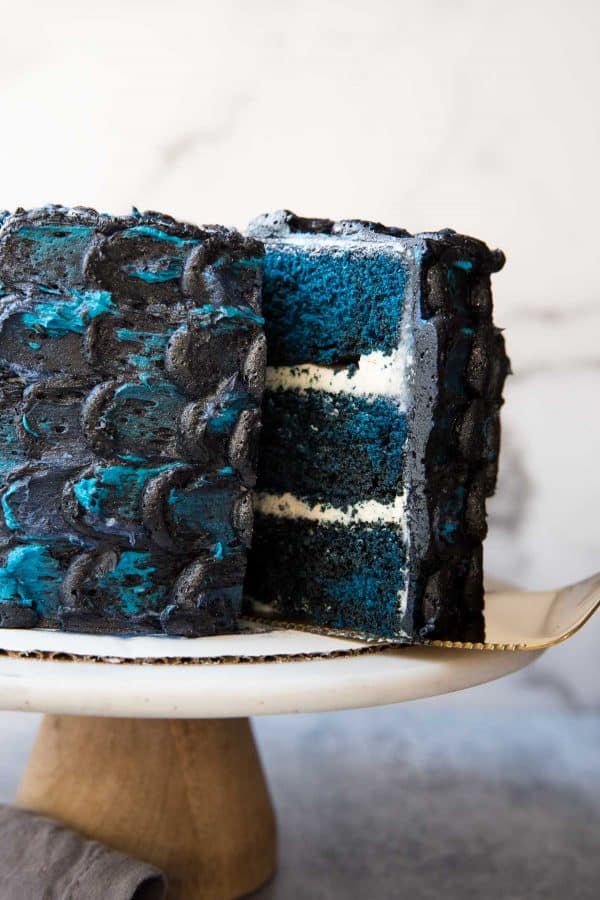 How to Make a White Walker Dragon Cake

This blue beauty is going to start with three layers or super moist, tender blue velvet cake. The recipe comes from my absolute favorite red velvet cupcakes (and that recipe is adapted from the original Waldorf Astoria's Red Velvet.) But we're going to add half to the recipes and turn it blue.

Even though they are called 'White Walkers' they're kind of a lot of blue, so we're rolling with it. If you want to substitute a white cake, I like this bakery style white cake.

You can whisk the royal blue gel food coloring into the buttermilk to make sure you don't have any lumps of color hiding in the batter. 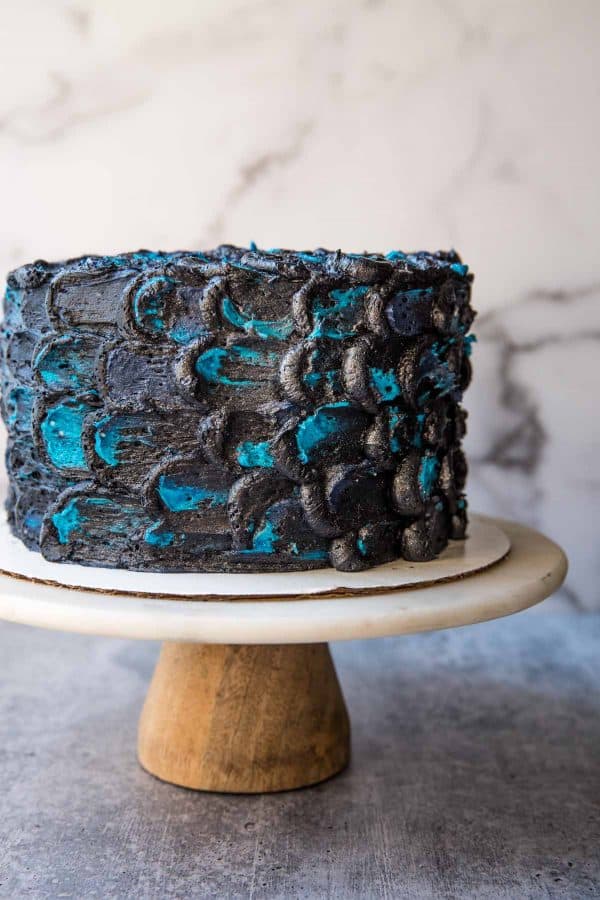 Once the cakes are baked, prep the frosting as they cool. American buttercream makes for an easy, go to frosting. Which boils down to simple ingredients:

The gel colors are my recommendation as they won't affect the texture of the frosting. You'll need three colors of frosting and silver edible shimmer dust to give it that white walker shimmer. For colors I went with Delphinium Blue, which is the darker blue, purple color and Sky Blue for that bright bold pop of color. Of course you'll need straight up black food coloring gel to get the dark shade of the dragon scale. 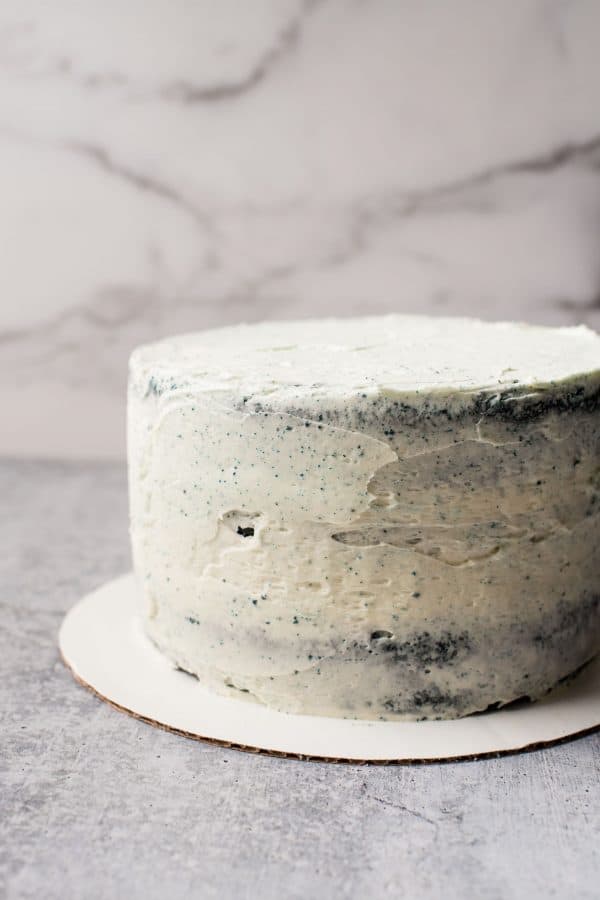 But before any of the fun dragonscale work starts, you'll want to fill the layers with white buttercream and do a crumb coat. Listen, if you want to dye the inside frosting too, be my guest. Go all in on this cake, its going to make you blue inside and out regardless....blue teeth, blue lips, blue um....ehm, bathroom business.

Hey, sometimes you have to make sacrifices for the Iron Throne and if eating a blue cake with black and blue frosting in one serving makes you the ruler of the seven kingdoms, someone pass me a fork. 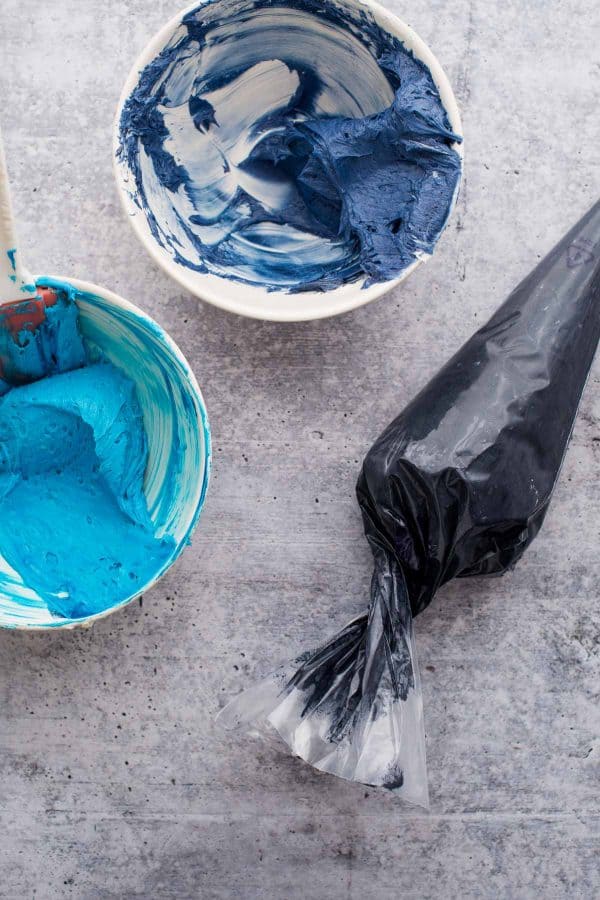 Once the crumb coat is applied and chilled to set, the get all your stuff ready to work out the dragonscale. You'll need the black buttercream in a piping bag fitted with a large round tip. Two bowls with two different colored blue buttercream and an icing spatula. I like to keep a plastic cutting board nearby too so I can scrape any excess frosting from my icing spatula.

Pipe large round dots in an uneven row down the side of the cake. Lightly scoop a tiny amount of one or the other blue buttercream frostings, or a combination of both. Press down with the tip of the icing spatula on the large round circle and drag it backwards. That's what will give the almost thumbprint pattern. 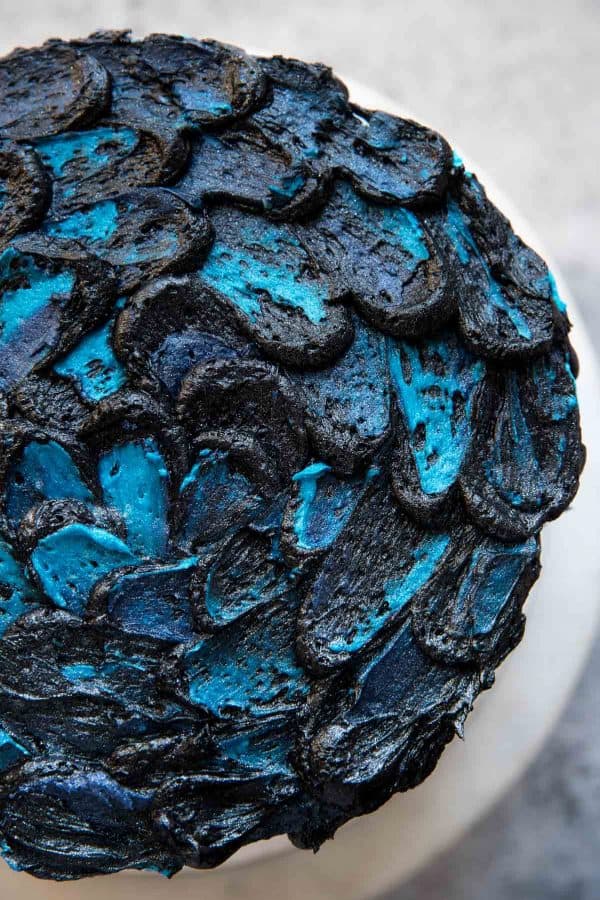 When you get to the end you'll have to work a little magic to blend in the last row to the first row. For the top of the cake, start in the center then work your way around and out. Once all the dragon scale is complete cover the white walker dragon cake in the silver shimmer dust that that icy look.

A word to the wise - icing colors will darken with time. I'd recommend trying about half the bottle of food dye for the black buttercream first, since a grey color will also be pleasing and it will darken up as the time passes. This will set nicely in the refrigerator and can definitely be made ahead. 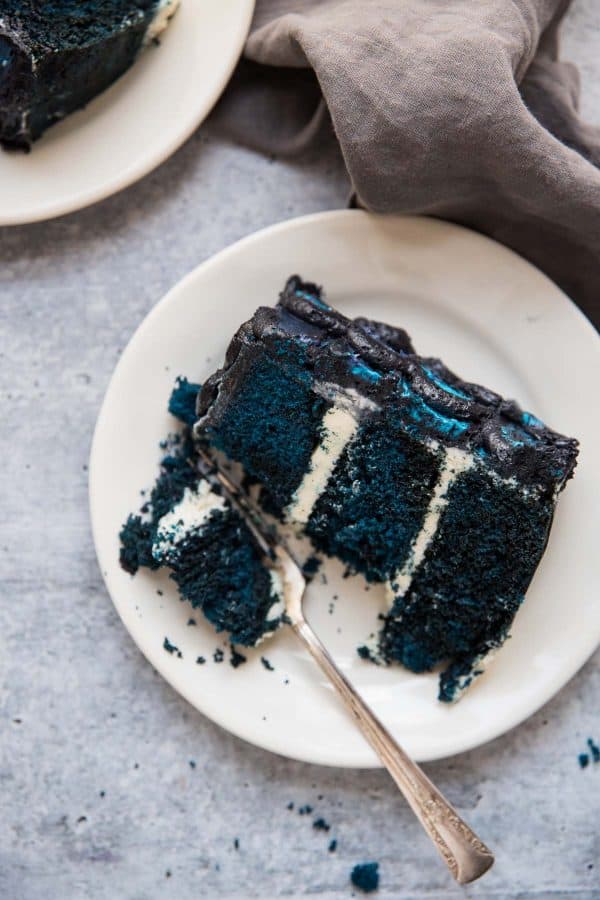 I swear - by the old gods and the new - this White Walker Dragon Cake is exactly what you need to watch the final Game of Thrones season in true style!

Did you make this recipe? Tell me in the comments! Just here for the pictures? Tell me your favorite GoTs character below! 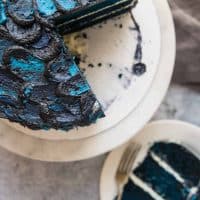