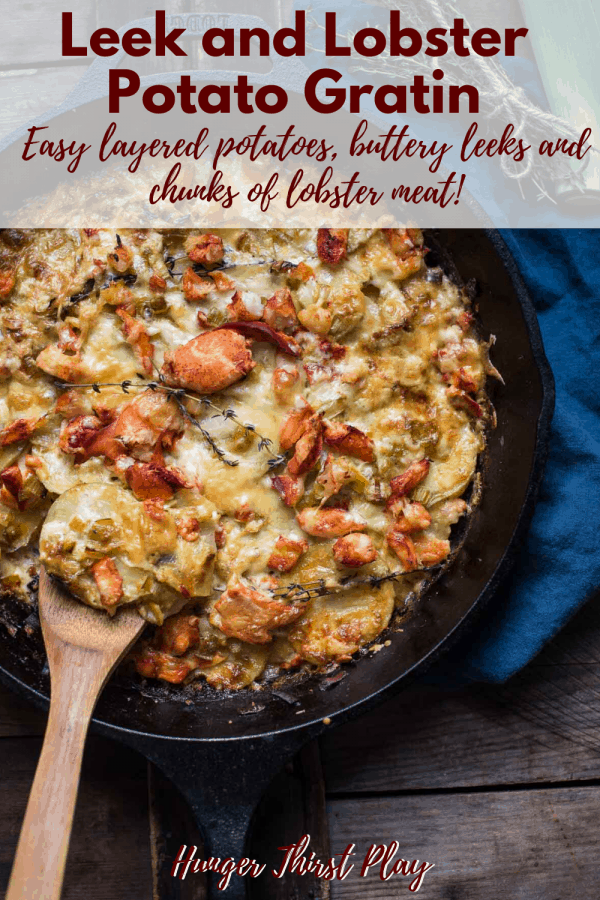 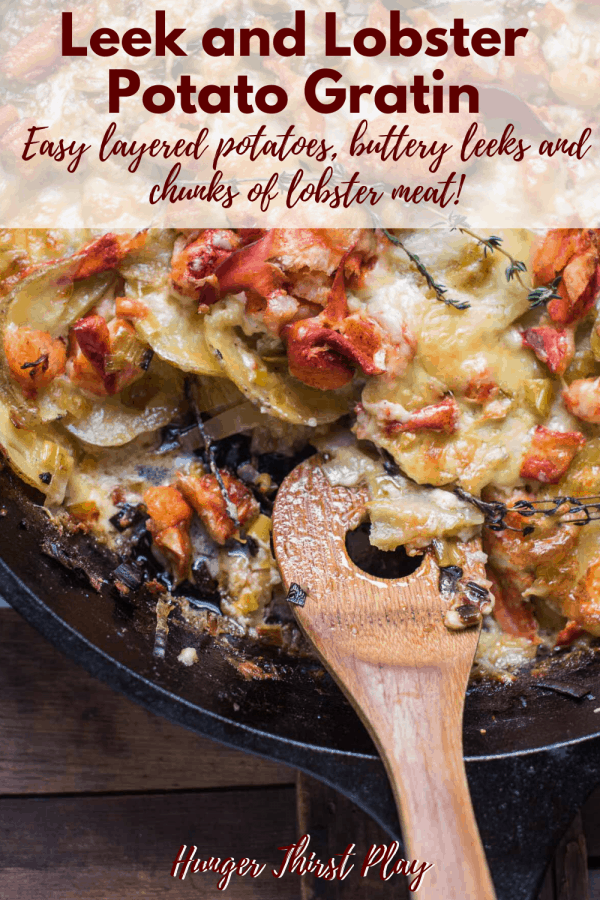 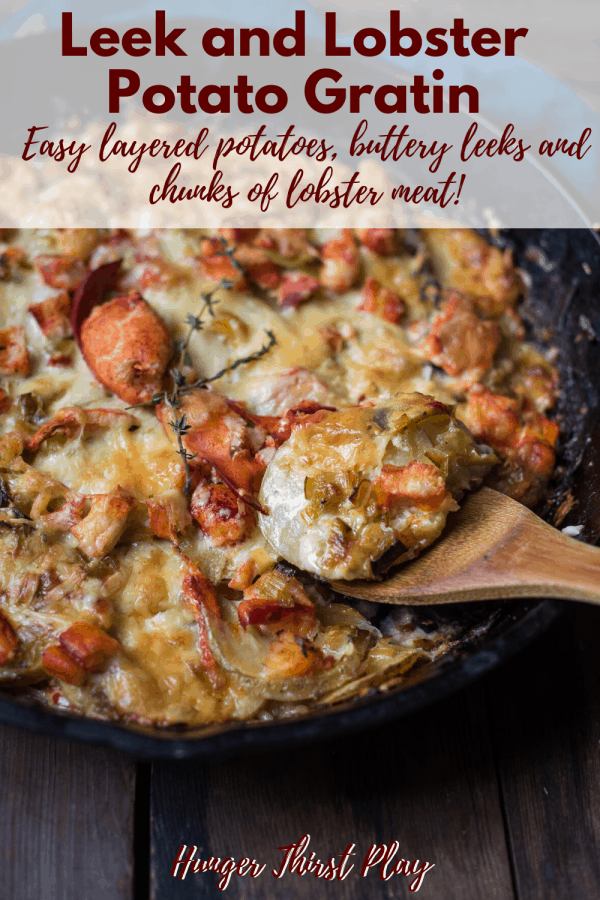 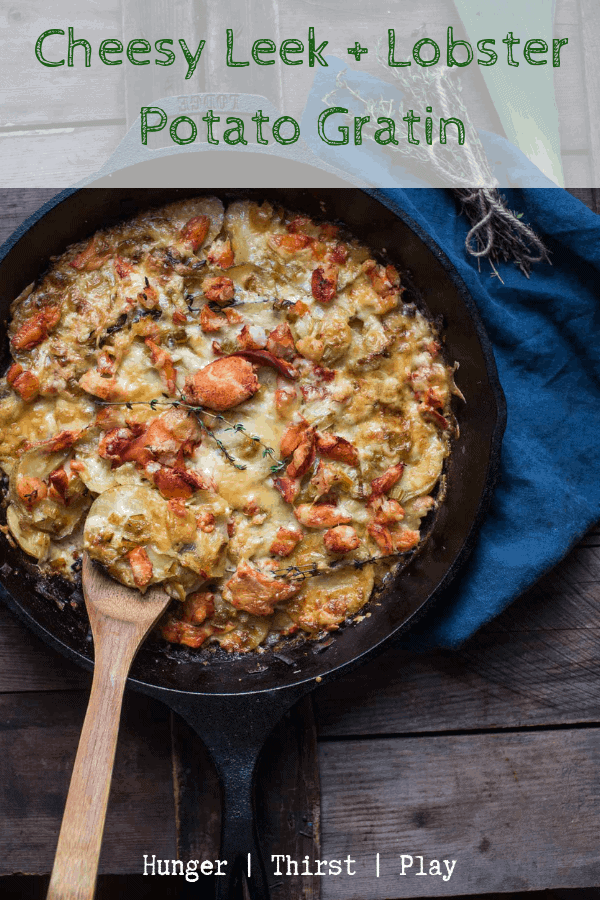 Leek and Lobster Potato Gratin is the perfect side dish for entertaining. It's a one pan, sauté-layer-bake that hits all the right flavors. Sharp, tangy Spanish cheese, sweet and succulent New England lobster, fresh herbs, savory leeks and thin layered potatoes.

This post is sponsored by Mahón-Menorca Cheese. All thoughts and opinions are my own. 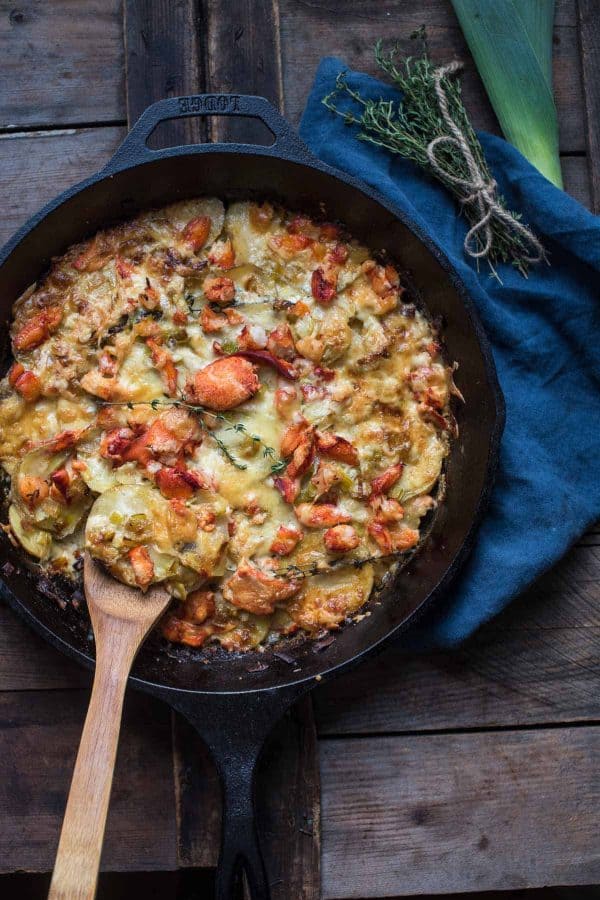 Sweet dreams really are made of cheese aren't they? There is literally a cheese for everything. Sweet, savory, hard, grated, stinky, mild. They're all good in my book. 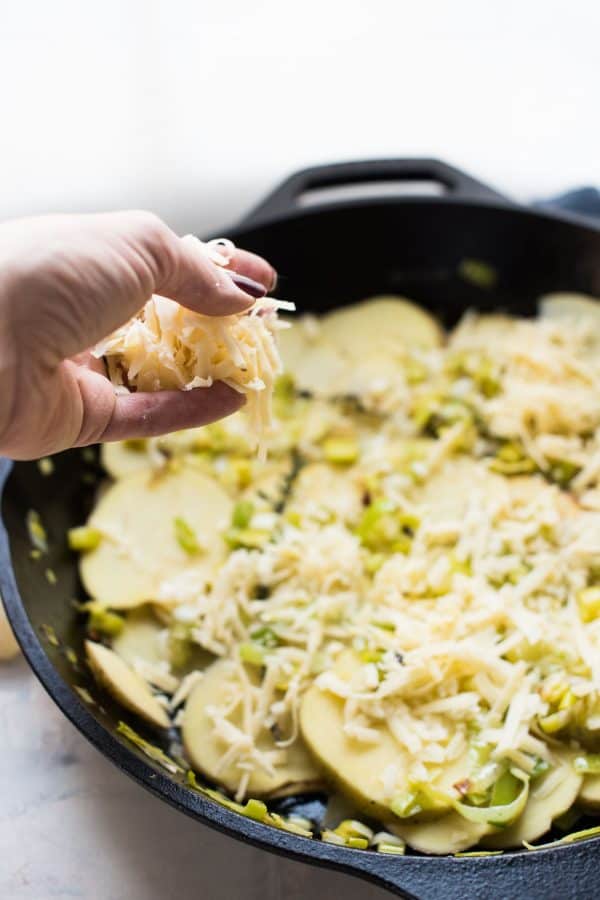 I was like, "hey, how's it going.'  And this Mahón-Menorca cheese was all like, "hey, I'm really grate....No really, grate me and make me into something cheesy." Challenge accepted.

So what do you do with a European cheese? You give it a little New England twist. Hellooooo Leek and Lobster Potato Gratin. 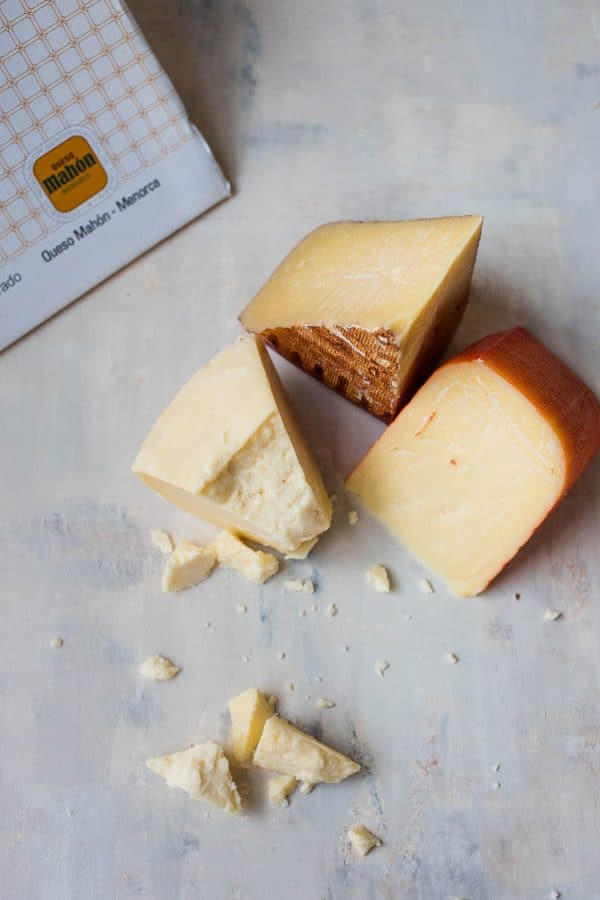 Aren't these blocks just beautiful? There are three different styles of cheese your can eat your way through, though the semi-cured is my favorite and what goes in this Leek and Lobster Potato Gratin.

The thing you should know about this cheese is it comes from such a beautiful place in the world. No, for real though, just google image yourself some Menorca photos and be instantly jealous of the blue Mediterranean waters...and the tasty snacks of course.

Mahón cheese is made from cow's milk it is slightly salty, sharp, with a buttery aroma and firm texture. While it's perfect for layering up potatoes and lobster it would be equally delicious alongside some bread and wine as well. 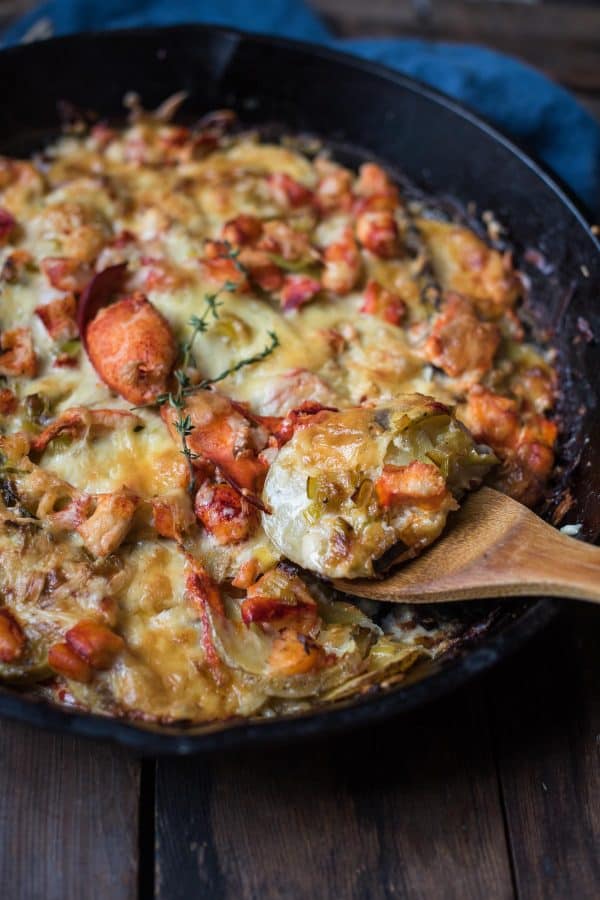 There are lots of reasons to be 100% obsessed with this side dish. Here's a few to get you started, just in case:

Those are a lot of real good things, amiright? And here's the thing about the lobster meat, especially this time of year in New England.

Tis the season for folks ordering steamed lobsters at the deli and forgetting or not picking them up. Who benefits from that? YOU, my friend. In general, during the season the fish market will sell the large chunk lobster meat, already steamed and shelled just waiting to go into dishes like this.

If the deli doesn't have fresh lobster meat ready to go you can absolutely buy it frozen and use that. There is zero shame in that game. But if you're a traditionalist, you can always steam and crack the lobsters yourself! 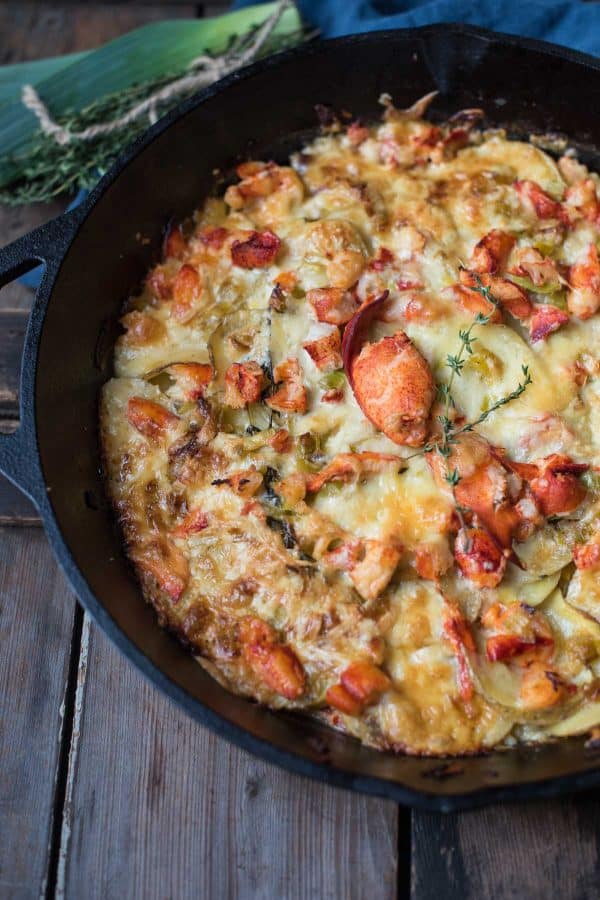 For potatoes, you should go to the good old standard Yukon Golds. If you scrub them well, they don't need to be peeled. They're firm for slicing but get nice and soft during cooking without a gritty flavor.

Slice them either carefully by hand or if you have a mandolin kicking around you can bust that out. 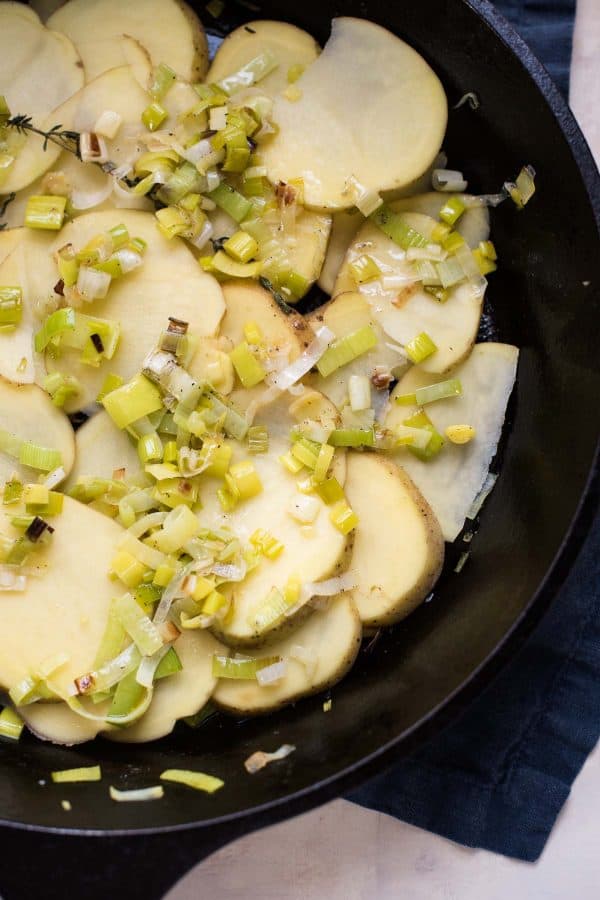 And for the one pan glory of it all? Just sauté up the leeks, transfer them (or as many as you can) to a dish and then start layering potatoes, leeks, cheese x2 then pour over with cream and bake.

Your guests will be impressed and your hands will be happy for just the one pan to wash.

Mahón-Menorca Cheese can be purchased nationwide at Whole Foods, and at other fine retailers such as Fairway Markets, Harris Teeter, Saveway, Kroger, Murray's, Central Markets, Costco, Gourmet Garage, West Side Markets, Zabar's, Central and Town & Country Markets in Seattle and at the best specialty stores all over the country. 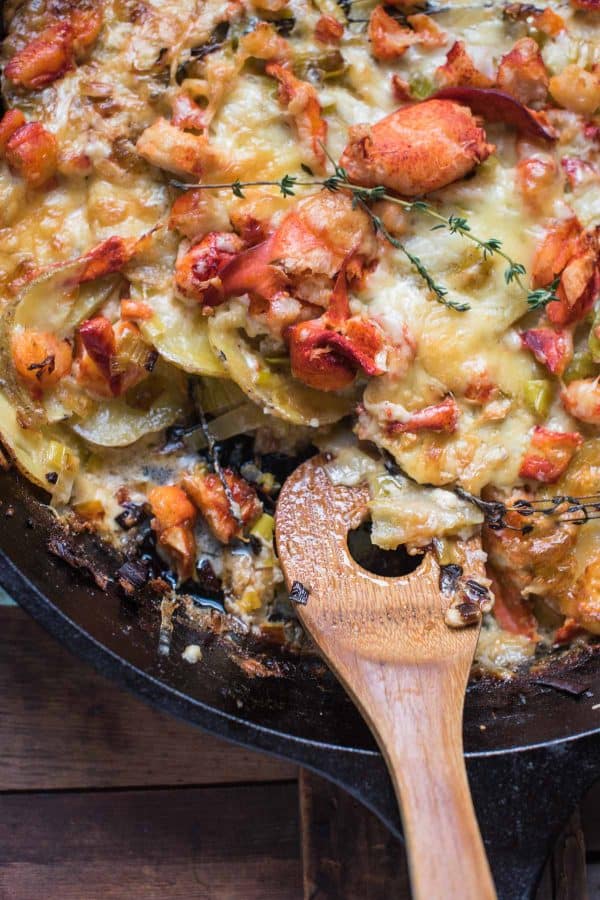 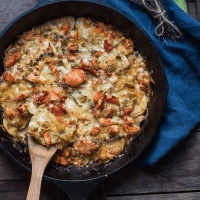